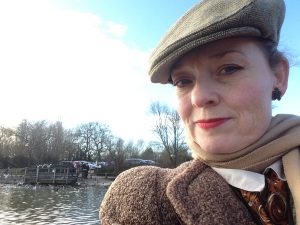 A Selfie at Furzton!

Hello every-one and I’m so sorry I haven’t been able to blog as frequently as I would have liked this January. But since the start of this year I have been snowed under with paper work and I’m only just getting ship shape. For those of you who have been following me will know last weekend was my accounts weekend. This is where I book myself into a hotel and work solidly on my accounts with-out the distractions of home. It’s a great way of getting the most boring job in the world done and this year I booked into the Premier Inn at Furzon Lake in Milton Keynes. I’ve learn’t from experience it’s important to 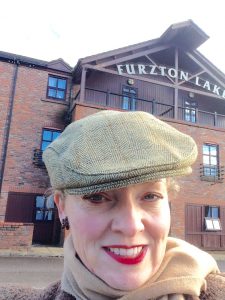 stay somewhere close to home as I always forget something. Usually it’s something really stupid like a hole punch or red pen so when the inevitable happens it’s not too much of an inconvenience to pop on home. However despite that the reason why I choose Furzon this year is because of it’s wonderful lake which always gives me somewhere interesting to run in the mornings before starting on my accounts

Of course some of you will have seen I got a new mobile phone for Christmas. I confess I don’t know what I’m doing with it and over the weekend I used up all my data as I didn’t understand I needed to use the hotels Wi Fi. To be honest I’m not really sure what Wi Fi actually is! I thought if someone face timed me it didn’t count – only DRAT, it seems like it does! It’s odd not having buttons and there is so much I need to learn but slowly I will get there or be it later than sooner! 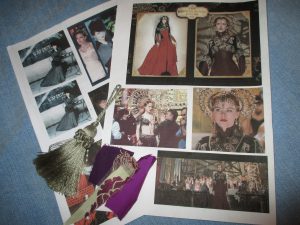 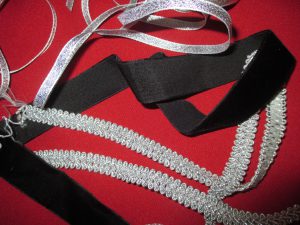 All I Need to Make a Pill Box!

Apart from paper work I’ve been working really hard to get everything ready for filming this Sunday. This will be the forth part to my major showreel as I set about creating the Operatic and Music Hall section. Judi my dress maker has been working really hard on my costumes and I have designed a new dress which will be three costumes in one. Much of my inspiration this time has come from Nicole Kidman’s costumes in Moulin Rouge.

For the Flower duet from Lakme’ I have taken my inspiration from Nicole’s Hindirehearsai Dress which will have a change of bolero as I sing both Lakme’ and Mallika to split screen. The same dress will be used for “Honeysuckle and the Bee” and I’ve had a beautiful jacket made to go over the dress in brocade. I’m a wonderful walking advertisement for home furnishings and I think the fabrics will look fantastic on camera. I’m also needing to make a pill box hat in the next few days to go with my “Goodbye Dolly Grey” uniform and dress my ostrieage feathers for my hair. Fortunately I was able to reuse one of my crinoline dresses and turn it into a bustle for “Hands Knees and Boomps a Daisy”. For this 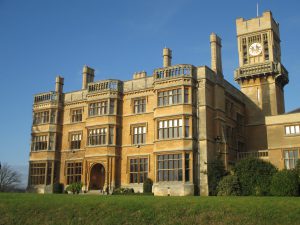 showreel I will have three different types of bustles to wear along with WW1 dresses, swimsuits and more. So Keep Watching!

Talking about showreels I signed off my 1940s and 50s one on Tuesday so I hope it wont be too long now before I have some new videos to share with you all. My new 40s and 50s showreel is really colorful as I was thinking along the lines of Hollywood Musicals and Technicolor. So as soon as it is up loaded I will let you know.

This week I have had a lot of running about. Connie went in for her service on Wednesday 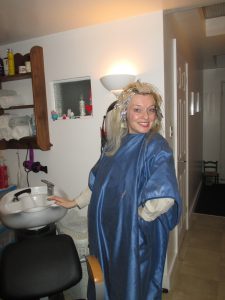 Behind the Scenes at Kim’s Salon!

while I had my yearly eye check. I was with Kim in the evening having my roots done and tomorrow I’m being spray tanned ready to film on Sunday. Today I was over in Old Warden and had lunch at  Shuttleworth after visiting the house. So with that I will leave it hear tonight. I doubt I will get another chance to blog before the weekend as I have so many costumes to sort out and check over.