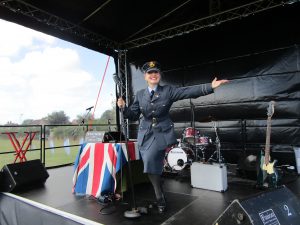 Setting Up On Stage at Sompting!

I’m afraid I can’t spend too long on my blog tonight as I have a pile of contracts and e-mails to get through and much to prepare for with an extremely busy September ahead of me. Dates are selling fast and I only have a few days left for 2021. Most of my prime dates have already sold for 2022 and it’s good to be getting back to some sort of show normality.

I’d like to begin tonight by thanking every-one who came to see my WAAF Battle of Britain Show in Sompting at the weekend. I had been booked to perform for a community event on Sompting’s 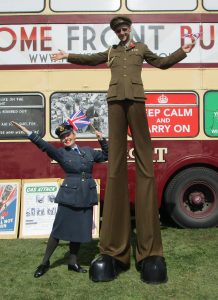 Meeting Up With a Jolly WW2 Giant!

playing field which attracted lots of up and coming acts from the local Brighton area. The theme was the 1940s and my show had initially been rolled over from last year due to the pandemic.

It was lovely to see the sunshine especially as last weekend was a bank holiday. While I was there I also had the pleasure of meeting up with 1940s enthusiasts on the Living History Double Decker Bus and a jolly WW2 giant on stilts. It’s amazing the people I meet when I’m out and about and we couldn’t have wished for better weather. For this show the organizer had brought in a  professional sound company which always makes things easier when there are a lot of acts on the billing. 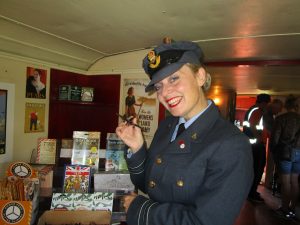 On Board the WW2 Double Decker Bus!

Portchester Castle on the 24th September with more details to follow soon. So keep watching this space.

In the mean time you can catch me this Sunday performing at Shuttleworth’s Vintage Air Show on the 5th September. I’ve been booked to perform three shows daily covering different periods in musical history. This include :- 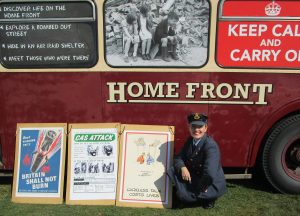 Life on the Home Front Bus!

I’m going to have to leave it here tonight as I have a lot to get ready and show plans to write. I’ve been performing every-day this week such a variety of different styles sometimes I don’t know if I’m coming or going. I also have a 1940s party at the weekend which I’m looking forward too very much and a Proms concert in between.