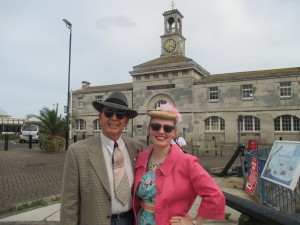 Outside the Maritime Museum in Ramsgate! 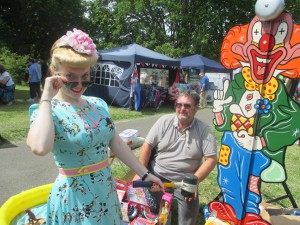 All the Fun of the Fair! 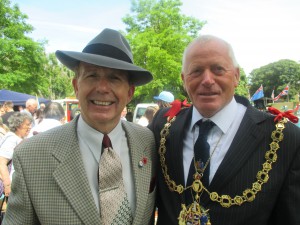 Paul with the Mayor!

Hello every-one and what a week it’s been. Last Friday I had a “Stars and Stripes” show in Aylesbury before driving down to Ramsgate in preparation for the Battles to Victory show. I had a really good drive down and I’m pleased to say my gizmo beeped as it was supposed to as I made the Dartford crossing. Phew – I always worry when it comes to tecknoligee! Sadly Paul’s journey wasn’t quite as good so I guess I was just lucky with the traffic. That M25 can be a real devil if you don’t catch it right.

Saturday was quite the perfect of days. The weather was fabulous and we both had a lovely time watching the bands and enjoying the event. One gentleman even brought his ferret to the show while Paul caught up with the Mayor at Lola’s mobile canteen and I enjoyed the stalls. My best buy of the day was a pair of vintage American tan stockings. They are really hard to get hold of now as I’m a size 9 in a stockings and it’s usually only the very large sizes which are left. So it was lovely to come across a pair.

Later that after noon Paul and I were invited down to the marina for drinks on the P22 Velo2. P22 had just come back from being featured in the new Dunkerque movie as one of the little ships. Although not built until 1952 she had all the right attributes for the film. In real life she was used by the Americans to patrol the River Rhine so it was lovely to be invited on board and visit a piece of maritime history. While we were waiting we had a lovely chat with Michael of the Ramsgate Maritime Museum. Sadly we didn’t get the chance to visit the Museum but I hope one day we shall when we are next in Ramsgate. 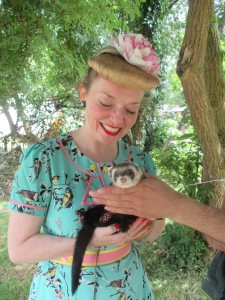 Making Friends with a ferret

Come Sunday Paul and I were looking forward to performing at the Battles for Victory show but due to an unexpected turn of events we return home. I’m sorry for all those of you who missed my performances but don’t worry you will be able to catch me on stage in Bexhill on 23rd July for the Roaring 20s event. I shall also be performing on Friday 29th July with a We’ll Meet Again WAAF show at Chipperfield Cricket Club, WD4 9B5. Tickets are £18 and include a ration supper and can be obtained by calling Trude on 07979 221682. Straight afterwards Paul and I will be heading to Wales and the Blaenau Ffestiniog’s Vintage Festival for the 30th & 31st July and then it’s over to the Isle of Wight and the Victorian festival taking place on the 6th and 7th August. I shall have more details about the above events in due course so keep following my blogs. 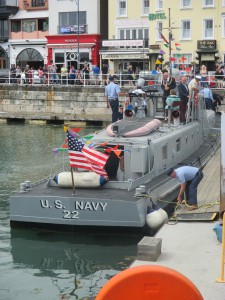 In the meantime I still have a mountain of paperwork to finnish off and I need to spend some time going through some of my showreels and make a few notes. As yet I haven’t started on my 50s and 60s page up dates which I really must get on with in the next few weeks. So with that in mind I will leave my blog here tonight and press on.