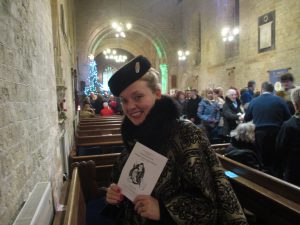 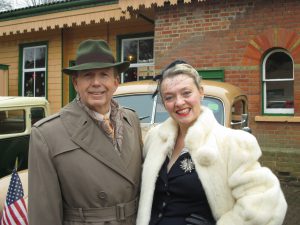 I’d like to start today by wishing all my readers and fans a very Happy New Year as I take this opportunity to thank-you all for your business and support over 2018. Since returning home from Porchester I’ve hit the deck running. It’s easy to underestimate just what busy months January and February are. It’s the time to sell and already I have most of the year mapped out and sold with lots of new opportunities on the horizon.

This week I’ve been performing New Year shows having learn’t Abba’s “Happy New Year” song for the season which has been going down well in my Winter Warmer shows. I also need to start work on “My Fair Lady” as the weeks are rolling by and I have lots to do before my first performance on the 1st March.

In the meantime I’d like to begin my blog by telling you all of my time away, which has included some well deserved holiday time as Paul and I made it along to St Mary’s Church in Portchester for Midnight Mass. I traveled straight down after my Christmas Eve show and it was good to spend some time away enjoying Christmas with Paul’s family and Poppy. In between times I still had a 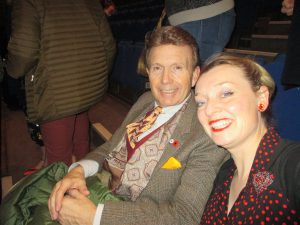 Paul and I at the Ballet!

few shows to perform in and around Portsmouth but on this occasion it wasn’t all work as we spent Boxing Day in Alresford and had tickets to see Ballet Theater UK’s production of The Sleeping Beauty at The Guild Hall.

Last year we went to the pantomime but this Ballet was a vastly superior production and it was a joy to watch the dancers. Paul and I traveled straight to The Guild Hall after my show and we enjoyed the pre theatre dinner which was excellent. I have nothing but admiration for the dances who go through endless agony to achieve perfection.  I hadn’t been to a ballet in ages 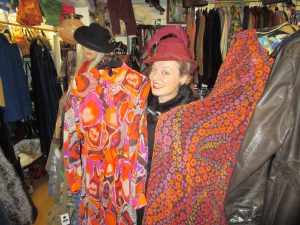 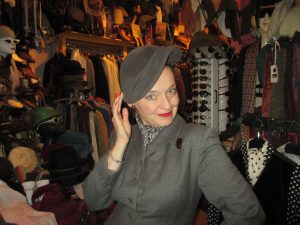 Shopping at The One Legged Jockey!

and for once it was a treat to be entertained rather than the one booked to do the entertaining.

This season I’ve noticed there have been a lot of Disney films on the TV which I’ve been taking musical mental notes from. I caught a little of Mary Poppins the other day and Paul and I went over to Port Solent to see the new Poppins film.  I enjoyed Lin-Manuel Miranda’s performance as Jack the Lamplighter and Emily Blunt in the title role although for me I didn’t think her singing voice was quite high enough in tone. For Mary Poppins you really do need to have a high soprano voice and it’s just a shame nobody asked me. After all Mary Poppins is my nick name and I have a wardrobe of shoes just like the ones Emily wore in the film. Now I think about it I’m not short of Marry Poppins suits and hats either!

For the sequel the story had been moved forward in time to the 1930s and the opening lamplighter’s song was reminiscent of the music from “Me and My Girl”. It’s given me lots of ideas as I will be putting a new Mary Poppins medley into production later this year and using it as part of my 2019 Christmas show. 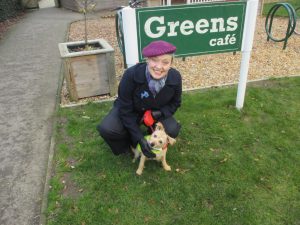 Out for a Walk with Poppy! 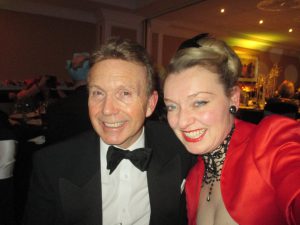 No trip to Portsmouth would be complete with-out a visit to “The One Legged Jockey” in Southsea. It’s one of my favorite vintage fashion shops and I’m now seriously collecting fashion from the 1970s so I can start work on my final showreel. When it comes to 70s fashion it’s my least favorite  period but I’m keen to finish my showreels and complete my video collection. Looking at my 2019 diary I’m not quite sure when I can fit filming in but it’s something I must plan ahead and do sooner rather than later before long.

The One Legged Jockey has no shortage of  vintage clothes and I was able to pick up the most wonderful psychedelic monstrosity which is straight out of  Abigail’s Party. It’s horrible! But the dress was just what I was looking for along with a flared orange jump suit from Tk Max. Seeing is believing so something for you followers to look out for in the future. I was also able to pick up a sweet grey 1950s hat which I think will go splendidly with my suit.

For New Years Eve  Paul and I saw 2019 in at the Hilton Hotel, Arundel. We went to the event last year as it’s one of the few places that hold a 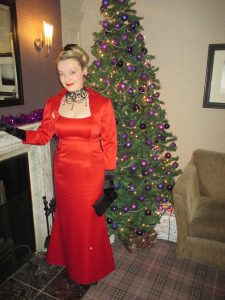 Happy New Year at The Hilton!

dinner dance and have a live band. When it comes to new years eve nether of us like discos but the Hilton puts on a good event and it’s always a pleasure to sit back and be entertained by a live band.

That’s all my news for now as I have heaps of paperwork to crack on with this month which I must get done. This weekend I will be performing a Music Hall Show in Syresham and I still have my costumes to sort out.