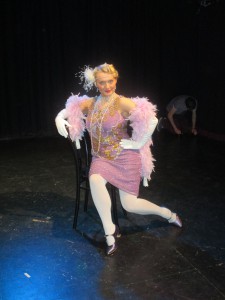 Hello every-one as you can see I’m back in my office after a busy week of prepping and performing “Happy and Glorious” shows. This Sunday I was filming a 1920s 30s showreel at the Limelight theatre in Aylesbury with film maker David Pustansky. This is my second film in the series and some of you may have caught my first showreel which featured music from the 1950s and 60s. I shall be back again in September to record the 1940s although I haven’t decided if I shall be mixing glamorous songs from the 40s with the 50s or just sticking with the 1940s. Trends are moving away from the home front British 40s style and far more towards the American crooning sound. I have a couple of numbers in production at the moment which are classic crooning tunes from the 40s which I’ve been wanting to sing for a long time and choose with the showreel in mind. 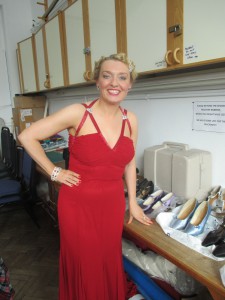 Backstage at the Limelight Theatre!

While I was with Richard in the recording studio last Monday we experimented with a couple of different keys. In this next film I’m keen to show off my crooning voice which not many people know I can do. Most people think that a soprano voice can only sound operatic but by dropping the keys the voice can take on a completely different dimension. Julie Andrews did this when she played Victor Victoria – another one of my favourite films. You can’t beat a good musical!

When ever I make a film or do a photo shoot a great deal of thought goes into it’s planning. On this occasion I was keen to show a wide variety of music from “Putting on the Ritz”, “There’s a Small Hotel”, “If I had a Talking Picture” to “Me and My Girl” and “Anything Goes” to name but a few. Perhaps I did have Julie Andrews in the back of my mind when I performed Marlene Dietrich’s “Falling in Love 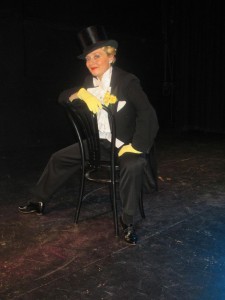 Again” in my tails. I have to confess the song came as something of an after thought, but I thought it would add a healthy contrast to the proceedings not only vocally but visually and make a change from dresses. If you click-through to my facebook page you will be able to see a short behind the scenes video of my singing “Falling in Love Again”. A little taster of what’s to come!

On Sunday I had the pleasure of working with my friend Kim as I needed not only a sound engineer but a hair dresser too. Kim can very cleverly do both so I was straight round to her salon first thing on Sunday morning having my hair styled for the shoot. The 1920s and 30s is all about finger waves which takes a great deal of skill. fortunately Kim had some original metal clips from the 30s which are needed to clamp the hair in order to create the waves. Once the style is clamped it was then a case of me drying off under the Climazone before Kim was able to curl my hair up at the back to create that 20s 30s look. 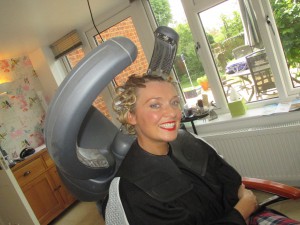 Under the Climazone at Kim’s Salon in Quainton!

Sunday was an extremely long day. I’d recorded 14 numbers and booked the theatre from 2pm to 8pm which perhaps was a little too long. However despite everything I was able to film 12 songs in total. I think it might be better in future to record less and film over two days as the camera is the first to pick up on tiredness. I wont get to see the rushes until the 25th May so I’m keeping my fingers crossed all will be well. I like to set myself high standards and after a full day on Sunday I was very glad to fall into bed. 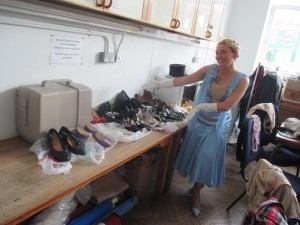 Backstage with my Shoes!

very much to getting this showreel up and running. My next project is to produce a 1940s one and then a Music Hall showreel.  The final project will be a film which shows everything I do from opera to Rock and Roll using a selection of footage from all of the above videos. So much to do and plan for.

In the meantime it’s fill steam ahead this week as I get set for Normandy. I’ve just orderd some more CDs for France and on Sunday I’m at Saracen House photographic studio in Stony Stratford. When I get back from Normandy I want to start work on refreshing 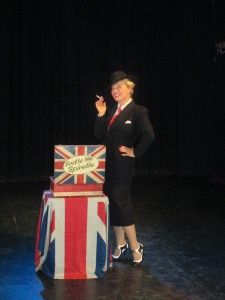 On Stage as Evette the Spivette!

That’s about all my news for now other than Kim and I went out on Monday evening to Bicester to see the film Florence Foster Jenkins. What can I say – wonderful! She had a voice like no other and was probably the least gifted soprano to ever sell out Carnegie Hall!

Well must dash – Thank-you for following and Toodle Pip! 😉