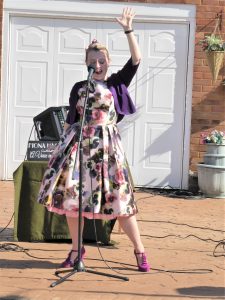 On the Sunny Side of the Street!

I’m afraid I don’t have a great deal to write about this week other than it’s been very much the same as usual with me working hard on learning lots of new songs. Wednesdays show in Chichester went well and I drove down especially to perform it. I had been booked to perform my “Don’t Sit Under the Apple Tree” show and I enjoyed the drive very much which gave me the opportunity to learn a couple of new numbers there and back.

A week Saturday I was back in the recording studio picking up a number of new songs. It’s been good for me to learn some new material taking me out of my comfort zone while trying out different singing styles. For those of you who follow me on Facebook you will have seen me streaming a couple of these new numbers between rehearsals. I’m currently working on a new Driveway Concert for this year and at the moment I have a collective mix of numbers from the 1940s to the 70s which 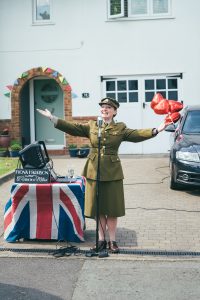 I’m trying to put into some sort of show order.

It’s important to never stop learning new songs and I currently have in production “Be Like the Kettle and Sing” and “By Myself” which I can’t wait to pick up once Richard has finished the arrangements. Two numbers I’ve been wanting to do for a number of years. In between times I’ve been adding lots of songs from the 1960s including “Summer Holiday” and “Love Potion Number 9” which are must haves for my Summer and Halloween shows. I can’t think why it’s taken me so long to add them to my repertoire.

Last Thursday I was performing a mixed music show in Burnham just out-side of Slough which gave me the opportunity to try out a few of my new numbers. Next week I start on Easter Bonnet shows as we move into April and then I’m fully booked for St Georges Day. It’s still very slow compared to how life was before the pandemic but work is coming in and April and May are starting 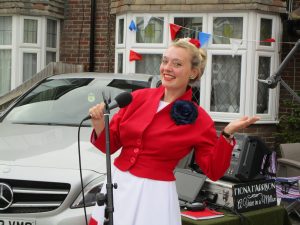 to fill up steadily.

Yesterday I did my first over seas zoom show for a club in Holland and I’ve been booked to perform for them in April. Monday’s show was something of a try out and I was pleased we had a good connection and no breaks in the wifi.  It use to be so much simpler in the old days when you just turned up and sang. With the world in lock down everything has gone high-teck and you have to be a wiz  with technology in order to survive. Like the tortoise and the hare it takes me a bit longer than most but I always get there in the end!

That’s all my news for now and I shall leave you with a selection of some of my photos from past Driveway Concerts.