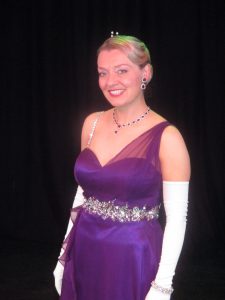 Stepping Out with Nessum Dorma!

Hello every-one I’m back at my desk after a busy weekend at the Limelight theater filming the second half to my Operatic Music Hall video. Some of you may have seen some of the photos on my facebook pages as I had a lot of songs I wanted to record and just as many costumes I wanted to wear. Some of these outfits take quite a bit of time to get into so I have to be quick and it’s easy to forget the odd button when you are rushing to get back on set. Backstage can often be chaos! 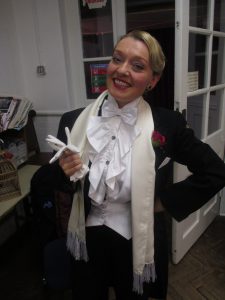 I was keen to record Nessum Dorma so we did two versions one in an evening gown at the beginning of the shoot and the other in my tails at the end. By this time we had almost run out of time so I shot the tails version in one take although afterward I noticed I’d 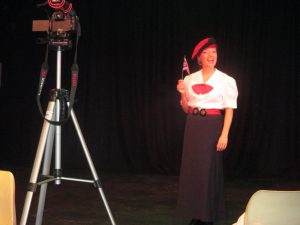 On Set and Ready to Roll Goodbyee!

missed a button on my waistcoat. Drat – I’m keeping my fingers crossed it wont show, but knowing how picky I am it probably will!

It’s been great fun to wear some new costumes for this showreel although many of my outfits I have had in my wardrobe forever. Believe it or not my bloomers were made for me for a ballet I did in a festival at the age of 15 and I’m still wearing them now. I often get asked about where I get my costumes from and the reason I have so much is because I’ve been collecting for 30 years and I never throw 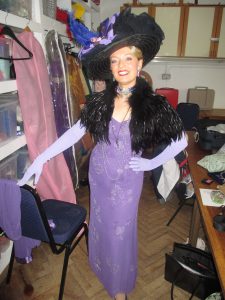 Backstage & in Costume for I’ll Make a Man of You!

anything away. I have a good eye and I often have my dresses re-modeled. The trick is to buy things when I see them.

For example my Victorian black lace up boots I bought in 1985 when “Granny Boots” as they were called back then were fashionable. I also have a brown pair which I bought at the same time in the sale and both pairs are perfect for wearing with my Victorian/Edwardian costumes. Some of you may recall I wore the brown lace up ones with my Norfolk suit in my 1920s and 30s showreel.

Speaking of showreels thank-you for all your encouraging comments about my latest 1940s and 50s one. If you didn’t catch my last blog I launched it last week along with my “Burlington Bertie” and “Evette the Spivette” showreels. These have already been embedded into my web-site so you can catch Bertie and the 40s and 50s showreel by clicking onto my Shows page and Evette on my 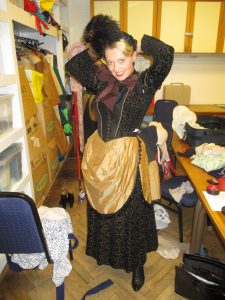 Evette the Spivette page. We have also up-dated some of the photos for Evette’s page just to keep things fresh with a few new photos added around my site on various pages.

2017 is a very important year for me as I will have been in show business for 25 years. Maybe that’s why it’s so important for me to make these videos and leave a legacy. It’s all about predicting trends and it’s interesting to see who’s clicking onto what and what’s attracting the most interest musically. Although I’ve been going all out with this my latest Music Hall video I think after 2018 there wont be much interest in Music Hall after that year. 2018 will mark the centenary and the end of the first World War so I was keen to make sure I had plenty of music from that period in my video. 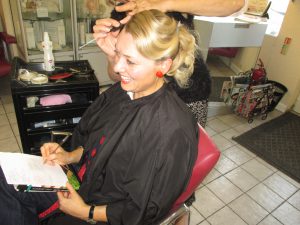 Choosing the right hair style and costume for the song is very important. I popped into Angela’s hair and Beauty on Saturday and Angela was able to create a wonderful WW1 style for me which went with all my songs. On this occasion I had 9 costume changes and I went for a simple blouse, skirt and beret for the girl next door look for “Goodbyee” and I wore a large hat and long beaded gown for the show stopping number “I’ll make a man of you” which is just that little bit racy! When it came to “Don’t Dilly Dally on the Way” I brought out my bustle and Victorian bonnet 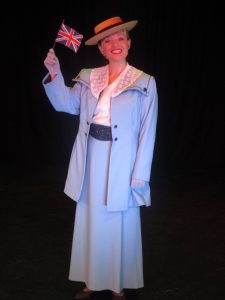 Pack Up Your Troubles!

which is the perfect out-fit for the number and I could still get my bonnet on over my hair style at the back.

This week I start on the first of my Valentine shows as Love is in the air but more on that in my next blog.