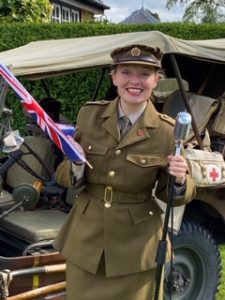 What can I say about last week! I’ve never known it so hot as temperatures climbed and my shows played on through the heatwave and later through the wind and the rain which followed. Luckily three out of my four originally scheduled shows went ahead and by the weekend I continued with my Driveway concerts. On Saturday I played in Aylesbury  for Armed Forces Day and later that afternoon I came back to Leighton Buzzard, changed costume and sang in Miles Avenue songs from the 1940s, 50s and 60s. I really enjoyed this concert as I had been asked to include plenty of Rock and Roll, Lindy Hop tunes for people to dance to which they did.

It’s great when every-thing goes to plan but by the time we came to Saturday the weather changed from hot to unsettled. In some ways I was quite relieved as I had been dreading the thought of wearing my ATS uniform in a heatwave. Temperatures dropped and the rain came in but fortunately it 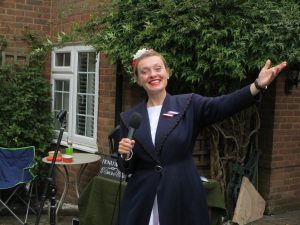 had been arranged for me to sing from a marque. By the afternoon the rain had subsided but the wind lifted and for one heart stopping moment I had to change computers when the wind caught my table cloth hitting the key pad of my computer causing a glitch. Oddly enough the wind caught my song on the beat taking it back to beginning and nobody even noticed as I sang through regardless and every-one continued to dance.

Phew – that was a close one! 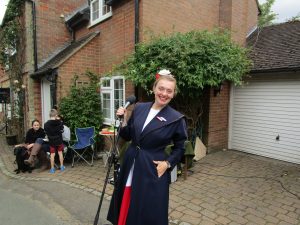 in Wing. Burcott High Street is like a country lane and to it’s advantage it very sheltered. On Sunday there was still a lot of wind but in Burcott you wouldn’t have known. The rain come in just as I was about to set up so I delayed the show by an hour and sang at 4pm. This was the right decision and we all had a wonderful afternoon. Residences brought their chairs and closed off the lane as I sang a selection of songs from the 1940s, 50s, 60s and 70s which included Vera Lynn and Edith Piaf.

It had been my intention to film both of these shows but I was a concerned my phone might blown off the tripod again so i thought better of it.

We are living through extraordinary times and I’ve been enjoying the challenges that the lock down has brought, adapting my shows to suit family audiences and visiting new places. This is the new normal and at the moment I’m waiting for the good weather to return. This Saturday I’ve been requested to perform in Babbage Grove and I’m keeping my fingers crossed the rain will stay away. I should also like to have a few days away and catch up with Paul before getting back to work next week with my Stars and Stripes Show and more Rock and Roll.