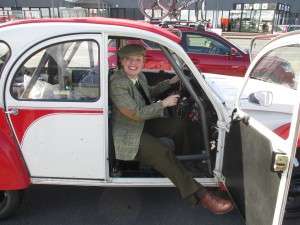 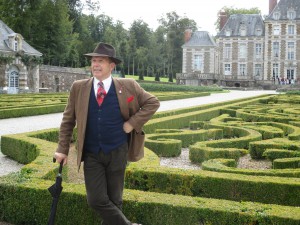 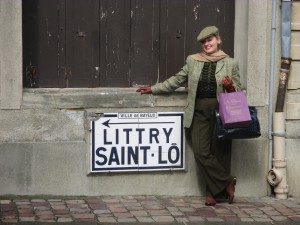 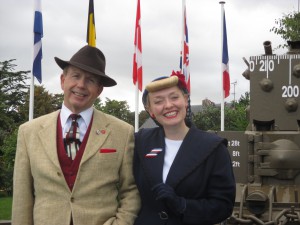 Paul and I at Pegasus Bridge! 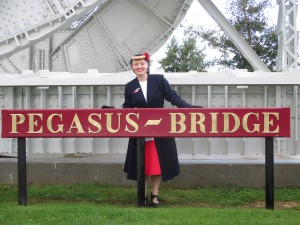 Out and About at Pegasus Bridge! 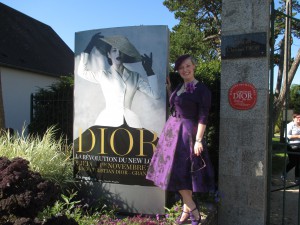 At the House of Dior! 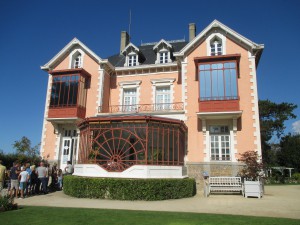 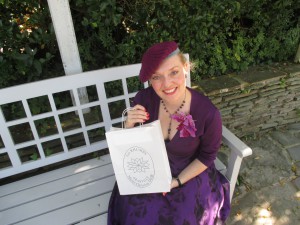 Hello every-one yes I’m back after a wonderful ten days away holidaying in Normandy! Paul and I have been out and about every-day sight-seeing, visiting all those fabulous places we never usually get the chance to see as I’m always too busy singing. On this occasion it was a little different. We have spent much of our time visiting the many museums and historical locations which we often end up having to dash by. I’ve already put up a few of my photos onto face book which I hope you will all enjoy. In the mean time I have a very busy weekend ahead with five shows to do over the next three days so much to do and much to sort out.

I arrived back home late last night. I was in the gym first thing this morning before  starting on my paper work and e-mails. That’s the problem with France one does tend to hit the old carbs rather and it’s time for me to get back into my routine. I’ve been touring a great deal of late staying in hotels so it’s good to be back at home where I can control my diet better. It’s not easy as a diabetic but I’m feeling better to be back on the poriage even though I have been enjoying the French bread rather!

I love to travel and it was wonderful to see Bayeux again through the eyes of a tourist. Paul and I made a point to visit all the museums which you can very easily do by riding on the little train. It costs 5.50 euros and gives you a good tour of the city which as city goes is really quite small. It was great to see the tapestry again and I enjoyed visiting The Battle of Normandy Memorial Musum which is right by the British Military cemetery. The MAHB Art and History museum has a fantastic collection of lace all of which is of the finest quality and was a joy to see. However out of all the museums we visited my favourite was the Chritain Dior Museum in Granville. Paul and I took a run out to Granville on the Sunday which from our B&B just down from Port en Bessin took about two and three quater hours. Granville reminds me a little of a French Bournemouth and on Sunday we had glorious sunshine. Dior’s house sits in a beautiful garden and it was a real treat to view examples of his collections including the notorious Bar Outfit which headed his 1947 new look. Before I became a professional singer I studied fashion design and later worked as a hat designer before going into show business. I take a great interest in clothes examining the cut very closely. To be so close to his collection was a wonderful experience and I learnt so much just by looking at the cut and the beautiful fabrics. I’m only sorry we weren’t allowed to take photos!

Another of our holiday highlights was visiting the Chateau Belleroy. Built in 1631 by the renowned architect Francois Mansart for Jean de Choisy. The Chateau and village inspired other historical sites including Versailles. In 1970 Malcolm Forbes the successful Americain magazine bissness man purchased Balleroy and set about restoring it along with his four sons and daughter. Paul and I went on a guided tour which we enjoyed very much. The house is richly furnished in the English and French style although apart from the ceilings very little is orrinal, as much was lost during the french revolution as you might expect. The funiture today was collected by Malcolm Forbes and the house has some wonderful paintings including Vignon, Beaubrun, Van Loo, Vernet and Count Albert de Balleroy who shared a studio in Paris with Manet.

It hadn’t been our intention to focus too much on D-Day as we devote so much of our time to that when I’m working in June. However I am really pleased we were able to make it over to Pegasus Bridge. One place I had always wanted to visit and on this occasion we even had tea at the famous Pegasus Bridge Cafe run by  Madame Gondree. Built in 1865 nere the bridge on the Caen Canal. The Gondree cafe was the first house and family liberated by the British 6th Airborne Division on the 5th/6th June 1944. We also went to the American cemetery, Omaha beach, Utah and the Juno centre at Courseulles-sur-Mer. It’s interesting to see how the museums vary in their re telling of D-Day depending on the nationality. For me the most moving was the American Cemetery museum which focused on the people rather than uniforms vehicle and equipment. The films played were very touching and then you see the gardens and all the many graves which brings home the sacrifice and the meaning of Operation Overlord! 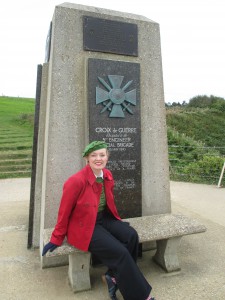 It’s been a fantastic ten days away and Paul and I have taken in so much. I’m back out performing in Normandy on the 21st November and I’m keeping my fingers crossed we have a smooth crossing. Coming back was fine but I was a little unwell on the way out. At Ouistreham we met up with a group of people who had gone out with www.2cvadventures This is where you travel to France and have a holiday adventure in a 2CV which looked like such fun! The 2CV is so French and such a cute car although Paul said he would prefer to drive his Mazda! Maybe it’s a girlie thing! I think 2CVs are adorable and reminds me of my red car handbag although my hand bag is a Fiat due to the fact the designer Braccialini is Italian. Just to keep you posted you will be seeing much more of my handbag when I launch my magazine so keep watching! 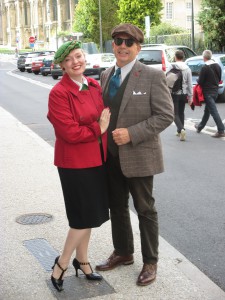 Paul and I sight Seeing in Bayeux!

This weekend I’m performing a mixed bag of 1940s, 50s and 60s shows. On Saturday night I’m performing at Pitstone Memorial Hall for the Vale Musical Society at 8pm songs from the 50s & 60s. If you would like tickets please call Jackie Farrow on 07905 282341. I shall also be singing songs from the 40s 50s and 60s at the Leighton Buzzard Railway for the “Sand and Motorcycles” event on Sunday 27th so see you there.

That’s all my news for now. Keep Watching and I shall post up more of my photos from my holiday on facebook over the next week or so.

Toodle Pip and Bye for now!  😉