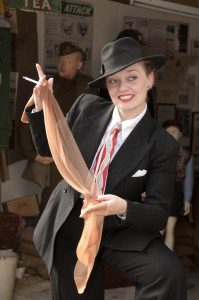 On Stage as Evette the Spivette!

This week I’ve decided to do something a little different blog wise and  publish an article I wrote a couple of years ago on Cigarette advertising. It may seem  strange that I would take an interest in such peculiar subject, especially as I am an avid non smoker and  I hate to be anywhere near cigarette smoke. I decided to write this piece after being inspired by the series Mad Men. It featured a lot of references to cigarette advertising in the 1960s and I was keen to find out more. This article is the result and I hope you enjoy reading it as much as I did researching it.

Over the years the tobacco industry has used every emotional tool imaginable to engage it’s audience, focusing on powerful imagery through advertising and endorsements. Who can forget those iconic Hollywood images of Marlene Dietrich, Humphrey Bogart and Joan Crawford holding cigarettes as tobacco companies would cross collaborate in movie promotions. 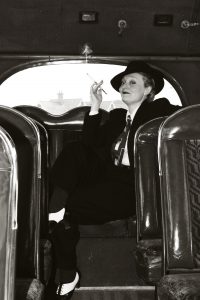 Although an advocate of anti smoking I too have been pictured with a cigarette while advertising my alter ego Evette the Spivette. When looking at old advertisements I can’t help but gaze in wonder at the master marketers who have helped to shape modern culture.

The first cigarettes were smoked by the Mayans over 1000 years ago. It wasn’t until the 17th century that the Spanish introduced smoking into Europe and by the 19th century smoking was reserved exclusively for the wealthy. 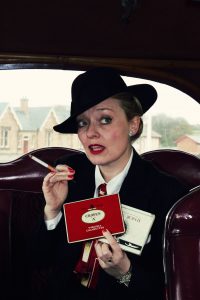 Evette with a Couple of Brands!

In the 1850s the British, French, and Sardinians fought along side the Turks in the Crimean War. It was at this time that Turkish cigarettes were past-over into western culture.

The tobacco industry was at the fore-front of modern advertising and as new printing techniques became available in the late 19th century cigarette firms engaged the best copy writers and artists to invoke images of exoticism and travel in their marketing. The Turkish cigarette brand Murad used images of sultans and beautiful women with pictures of the orient in it’s advertising to entice the west. In return it would use images of colonialism and western culture when selling it’s cigarettes back to the east.

In 1913 Camels ran a full page add in all the American newspapers on the same day. This had never been done before and all it said was “Camels are coming!”. On the next day the add read “There will be more Camels in your city than in all of Arabia!” and still nobody knew what camels were. On the third day the full page advert read “Today you can purchase your Camels cigarettes at you local tobacconist. Camel cigarettes are here!”.

So successful was this campaign that Camels quickly captured 50% of the market as similar campaigns were run in other countries.

Lucky Strike had wanted to change it’s colours for years. This opportunity presented itself during WW2 when it made up the story that the critical war material of green copper went into it’s packaging. Brilliantly the brand marketed itself with the patriotic slogan “Lucky Strike (Green) has gone to War” which proved to be extremely popular not only with men but with women on the home front.

Prior to WW1 no respectable woman would be seen in public with a cigarette as it was symbolic of a prostitute. During the first world war more women started to smoke covertly in the privacy of their own homes, however smoking was still considered to be impolite in public. The tobacco industry realised it was missing out on 50% of it’s selling potential and wanted to change public perception.

In 1926 Chesterfield ran an add which pictured a woman sitting next to a smoking man with the slogan “Blow some my way”. During the war many women had taken on the roles of men and with growing support for the Suffrage and women’s rights tobacco companies were quick to seize the opportunity.

In 1927 Lucky Strike employed Edward L Bernays who is fondly referred to as “the father of public relations”. Lucky Strike wanted to associate it’s product with fine dining and his job was to change public opinion about smoking in restaurants.

Before this time it was considered rude to smoke after a meal in a restaurant until Bernays came up with the slogan “Reach for Lucky instead of a sweet!”. This slogan also appealed to women and coincided with the Suffragettes matching in New York’s Easter Parade. The right for a woman to smoke with-out ridicule was supported by the suffragettes and within the space of a couple of years smoking in restaurants became acceptable due to a change in attitudes and popular culture. Europe was quick to follow as every flapper wanted to appear fashionable and up with the times.

Seizing the 1927 moment Marlboro were the first cigarette brand to target women directly. It market itself as an elegant woman’s cigarette with “Ivory tips to protect the lips”. Later Benson and Hedges produced a Debs brand with rose tips so you wouldn’t see traces of lip stick while other companies produced long slim cigarettes in elegant boxes implying you would stay slim by smoking them. The most famous brand and still produced in Old Bond Street, London today is the Sobranie Cocktail. This cigarette comes in five separate pastel shades and has a gold filter making it one of the most sophisticated cigarettes on the market.

After several decades of picturing elegant women in repose Marlboro felt it’s product lacked lustre. In 1954 it underwent a sex change and the Marlboro man was born. By picturing a cowboy both sexes were attracted to the new rugged image as Marlboro’s sales increased.

It was as early as the 1920s that the public first started to be concerned that smoking might be dangerous. However the tobacco industry was quick to dismiss these claims as unfounded saying more research was needed. It’s glamorous advertisements and sporting endorsements gave the impression of health and beauty and it wasn’t until the 1950s when the Readers Digest published an article entitled “Cancer by the Carton” that the public started to question the health implications.

Ever evolving and adapting cigarette brands started to use pictures of Doctors in their advertising with slogans saying “More doctors recommend Camel cigarettes than any other” or “Filters best” and “It takes the you know what out of smoking” not that anyone quite knew what the you know what was.

The American Kent brand introduced the Micronite filter in the early 1950s after concerns grew over the Reader Digest article. Kent promised consumers “The greatest health protection in history” and marketed itself as the smart cigarette smoked by educated professionals until it was realized that the filter tip was made of asbestos resulting in a number of expensive legal cases.

Today tobacco advertising has completely disappeared from magazines, television and sporting events. The imagery and slogans these adds leave behind give us a wonderful insight into 20th century life and culture.

That’s my article. Next week I shall tell you more about my new web-page “What the Papers Say” and my new flicker book video “Stupid Cupid” for Valentines Day.