Once again I’m in a bit of a dash to get all my paperwork up to date and ship-shape between my Christmas performances. It’s already proving to be a topsy-turvy season as nothing is certain. I’ve lost four shows this week due to people testing positive at various venues I’d been due to perform at; and with this new strain of Delta Covid every-one is feeling a little jittery.

A lot of the time I don’t know if I’m coming or going  and I’m having to take each day as it comes. Yesterdays afternoon show got cancelled literally twenty minutes before I was due to leave but fortunately my evening show went ahead as planed. I still have plenty of work in the diary but who knows what the next couple of weeks will bring. 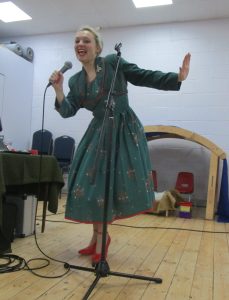 On Stage for Bromham WI

Next Tuesday I’m hooking up with “1940s Events and Social Space” on Facebook to stream one of my Christmas shows live from my page. Every day from Monday they are having three artists stream their shows live so I’m looking forward to doing so, as this will be a first for me. All being well I should be performing in Didcot  at 2pm earlier that day and then I will be rushing home to stream live form 9pm. For those of you who are friends with me on Facebook you will be able to see my show from my personal page (That’s the pink piano photo page, in case you are wondering which one).

I dare say with so many fine acts performing over the week there will be a fair amount of Christmas song repetition so I’ve decided to  perform my “Fairy Tale Christmas Spectacular” show which gives great musical variety and is perfect for the time of year. So if you are free on Tuesday 21st December at 9pm it will be lovely if you are able to join me on 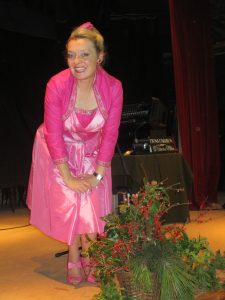 line for what promises to be a fantastic show.

The last couple of days I’ve been doing a number of Christmas party shows for the WI. Last Thursday I was at Cranford Village Hall, Monday I was in Bromham and last night I was at The Victory Hall in Long Marston. Tonight I should have been in Beaconsfield but sadly many members didn’t feel confident about coming out and Beaconsfield WI plan to reschedule their party to the summer.

Last Friday I was in North Crawley performing for the North Crawley Historical Society. So their show could go ahead the Society took the decision to relocated to the beautiful church of St Firmins.  As the members enjoy classical music I made sure I included Opera and performed Schubert’s Ave Maria which worked perfectly with the churches natural acoustics.

I shall leave you with a few photos and I must make a start on my Christmas cards. I’m so behind this year but despite everything I’m still rolling along and making the best of it which is what we Brits are good at!