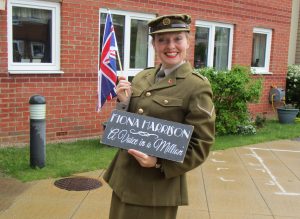 Hello everyone, sorry I’m so late with my blog this week but it’s been a busy ten days with me out and about performing VE Day and birthday shows. I’m only just starting to catch up with my paper work today and I have a lot to plan for and organise in the next few days. Thank-you to every-one who has been following and watching me on line. I’m now starting to stream my shows, which means many more of you can enjoy them and my clients have a record they can share and look back on later.

For VE Day I had the pleasure of performing in 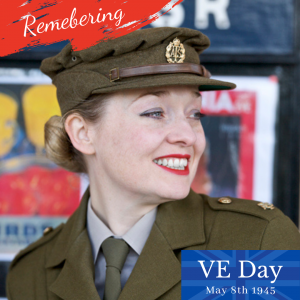 Aston Clinton and then the following day I was in High Wycombe. Every show is different and it’s important I’m able to adapt quickly to each set up. 95% of my shows are still being performed out-side but now the care home market is starting to open up again I’m receiving invitations to perform for residence.

Lateral flow testing is now becoming a daily occurrence as I travel from place to place and some homes like me to perform behind a screen where others have asked me to sing in a mask. It’s not easy singing in a mask as it’s a little like running in a corset and the mask hinders my oxygen intake. I confess on Monday I felt a little faint after performing an hours show this way. Initially I was booked to perform in the garden 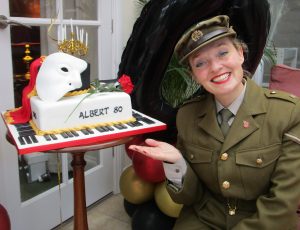 but due to the weather I was moved indoors and I think I was over heating a little too. For out-door shows I make a point of putting a T-shirt on under my uniform. The extra warm is often essential with our current topsy-turvy  weather. 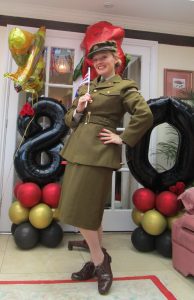 On Stage at Albert’s Party!

all about performing smaller shows but regularly. The big event’s haven’t really opened up yet and the few which are going ahead are honoring their  acts from 2020, which is only right. I’m looking forward  to stepping out on large stages again but at the moment it’s about ticking over and performing smaller shows. It’s given me a lot of pleasure performing for people who might not have seen me otherwise and it’s also made me look at different types of music.

Next weekend it’s all change as I sing the music of the 1950s, 60s & 70s and I’m not back in uniform until the 29th May. Yesterday I had the pleasure of singing for an 80th Birthday in Stoke Hammond. It 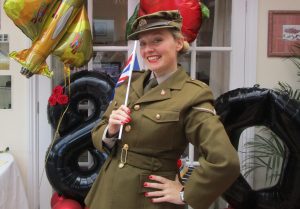 Dressed for the 1940s in ATS Uniform!

was a lovely party as I was asked to sing songs from the 1940s and Musicals for Albert’s 80th. I was particularly impressed with Albert’s birthday cake which paid homage to the musical “The Phantom of the Opera”.

That’s all my news for the moment as I have a pile of contracts to get through and my weekly accounts to attend to.