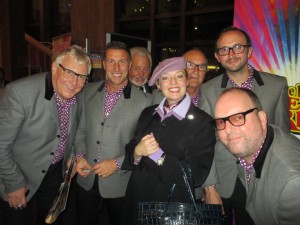 Me with The New Amen Corner! 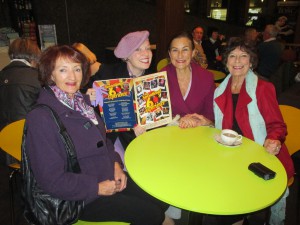 Chris, Lynda, Betty and I at The Waterside Theatre! 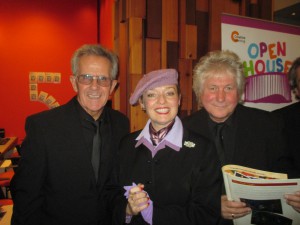 As you know this week I’ve been out and about singing the 40s and in fact I’m in a bit of a dash as I’m just heading off very shortly for my Saturday Night show in Woldingham, Surry. I confess I’ve been so busy this week I’ve rather lost track of the days what with one thing and another. Yesterday I woke up thinking it was Thursday rather than Friday but realised just in the nick of time as I was due for a manicure at 10am and then I had to dart straight off to my 1.30pm show.

I’m jolly pleased I realised quite quickly my mistake as my friend Betty had kindly booked tickets for a group of us to go to the Waterside Theatre in Aylesbury to see the “Sensational 60s Experience”. Although I sing the music of the 60s I feel my knowledge of this musical period is rather limited and it was wonderful to listen to some live bands. I confess I didn’t know any of the bands, artists or many of the songs which is down to my ignorance rather than the lack of their fame. However I did enjoy the music and by the end we were all rocking in the isles. The show was hosted by Alan Mosca from Freddie and the Dreamers and we saw Chis Farlowe who was originally Chris Farlowe and The Thunderbirds. He sang Out of Time, Handbags and Glad Rags, Let the Heartaches Begin, Mr Pitiful and Midnight Hour. Steve Ellis – The Voice of Love Affair sang Rainbow Vally, Bringing on Back the Good Times and A Day Without Love although at one point I felt he got a little carried away with the mike stand and it looked as if he had hurt his shoulder and then went on to split his finger – Bless! Sadly he didn’t make curtain call so I hope they allowed him to lie down! 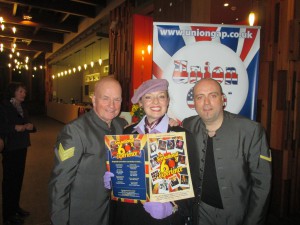 The band which backed these artists were The New Amen Corner who were excellent and Glen Leon really shone on lead vocals and Guitar. I enjoyed Union Gap UK and Herman’s Hermits and when you read about what these bands have achieved over their long careers it’s amazing. To date the Herman’s Hermits have sold 75,000,000 records and I loved their song All Over the World. I must do that one.

Gosh I’ve just seen the time and I must dash. Keep Watching and Toodle Pip! 😉