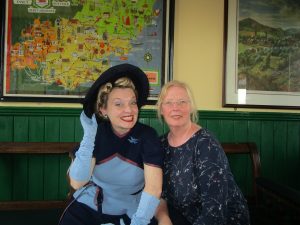 Between Shots with Angela Adams!

I’m sorry I’m a little later with my blog this week but I’ve been extremely busy tying up loose ends and catching up on paperwork. I head off to the South coast next week for a mini tour and I shall tell you more about that in a moment. Firstly this week has all been about “The Best of British” as I’ve had a run of “Last Night of the Proms” style concerts. It’s been great fun which has also tied in with today as it’s “Music Day”. You can’t really go wrong with “Rule Britannia” and “Land of Hope and Glory” when your audience arrive prepared and ready to wave their union jack flags from the outset! 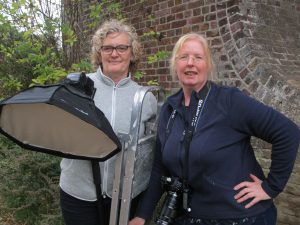 Kim and Angela between Shots at the Viaduct!

The days and weeks are rolling by and I can’t believe it’s only two weeks away when Paul and I will be flying back out to Milan to perform for Graffignana’s vintage festival. This year I have been booked to perform the music of the 1950s, 60s & 70s and on the Saturday night Paul and I have been invited to perform a special concert in Lodi Vecchio which will be attended by the mayor. I’ve lot’s to try and sort out before then which means I’m working flat out behind the scenes to see everything is up to date before we fly.

Last weekend I had the pleasure of working with 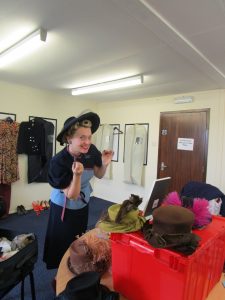 top photographer Angela Adams and her assistant Kim at The East Anglian Railway Museum in Colchester. Paul and I have been booked to perform there next year and I was keen to get some new 1940s fashion shots recorded before the weather changes and moves into the colder Autumn/Winter season.

As with all shoots it’s all in the preparation and I spent Saturday morning in the hairdressers getting ready for the shot before heading off to Colchester. I booked a full days secession with Angela which believe me is hard work. It’s deceiving to think standing in front of a camera isn’t tiring, in fact it’s exhausting, as you are constantly changing your body shape in an attempt to get those perfect angles.

For all of us our day started early as Kim drove all the way from Hampshire and Angela from Norfolk. I arrived at the 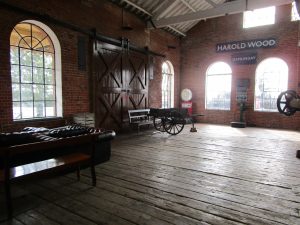 Inside the Goods Shed!

museum as soon as they opened and it took me a good 40 to 50 minutes to carry all my costumes into the museum. On this occasion I brought 14 out-fits which I knew was a little ambitious for the time scale however we did manage to photograph 11 costumes which was quite an achievement.

Time is often taken up in changing and moving from location around the museum. You have to be quick, and thorough, often grabbing a bite between fast changes. I haven’t seen the photographs yet but I’m looking forward to seeing them very much. Apparently there are some fantastic shots and as soon as I get them 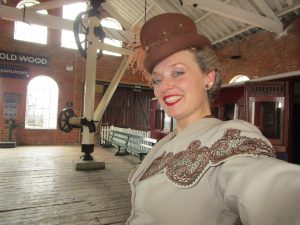 through I promise to sharing them all with you.

On Monday I’m off down to West Sussex and Hurstpierpoint to perform at Danny Mansion which was once the home to David Lloyd George. It’s said that when Lloyd George heard the news of victory on the Western Front bringing an end to the first World War he danced the hornpipe. As prime minister from 1908 to 1915 Lloyd George rejected Chequers as his grace and favor mansion, preferring Danny House. I’m looking forward to performing there very much as I’ve been booked to perform my “My Fair Lady” show which starts my South Coast tour. 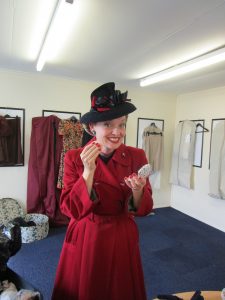 I’ve been invited to stay the night and from Danny I will be heading onto Chichester with shows booked everyday to include “The Magic of the Musicals”, “Don’t Sit Under the Apple Tree”, “Thank-you for the Music” and “The Good Old Days” before returning on Saturday with “The Swinging 50s & 60s”.

This weekend I’m back in the recording studio trying to sort out a few last minute recording issues with the “My Fair Lady” show-reel and working through some new numbers with my pianist friend Ross. I’m not sure if I will have time to write another blog before I go away but if not I look forward to catching up with you all when I come back from the South coast. In the meantime enjoy my behind the scene shots from the railway museum and thank-you every-one at Chappel Station who helped us with the shoot. 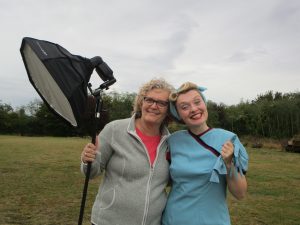 Kim and I Between Shots!