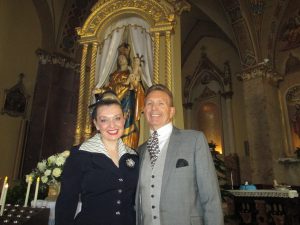 Paul and I at St Peter & Paul Apostles Church! 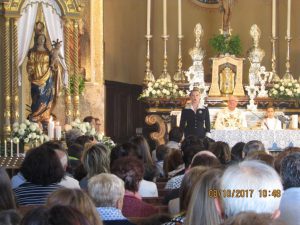 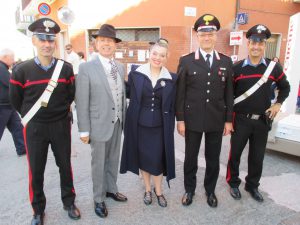 Out and About in Graffignana! 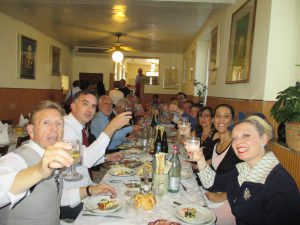 Sitting Down for Lunch!

After our Saturday night show at Serata della Riconoscenza Paul and I were keen to get to bed. With our early morning flight at 6.20 am we had been up solidly for 48 hours so it didn’t take much encouragement for us to fall straight to sleep as soon as we got back to our hotel. Sunday was our show day as I was due in church to sing in Latin for morning Mass “Ave Maria” before performing my afternoon concert at 3.30pm. This had been scheduled to take place on a stage out-side the church in the town square Piazza Mazzini to which the whole town had been invited.

I don’t mind confessing I could have done with a few hours extra sleep that morning but as they say in show business the show must go on and Paul and I were all up, pressed and dressed really for our 9.30am lift with mass at 10.00am. Graffignana has a wonderful church choir who are a joy to listen to and during the service they had a soloist. A trumpet player who played superbly and who was of the highest caliber. 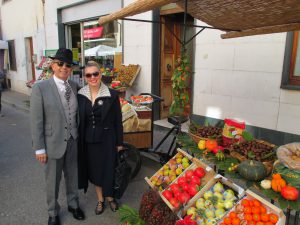 Paul and I Shopping in Graffignana! 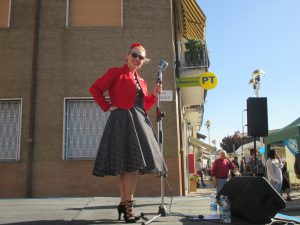 All Ready to Shake Rattle and Roll! 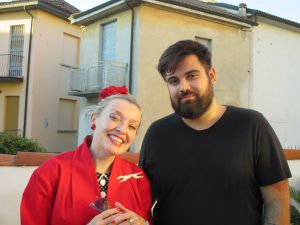 Me with Our Sound Engineer John! 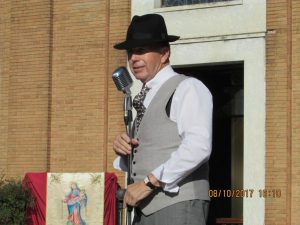 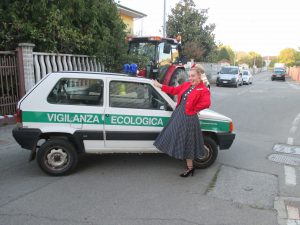 technique. On this occasion I had no microphone and I needed to be heard over 300 people. I was still a little tired and it takes real strength to sing the proper way with-out a mic in front of a big audience. But it’s good to go back to basics as I worked my diaphragm just that little harder than normal to support those long sustained notes. It’s true when you have a microphone you don’t have to work quite so hard but when it comes to classical singing good technique is essential.

After mass Paul and I spent a little time at the festival market which sold everything from vacuum cleaners to cars, sugar almond sweets to snails. There was an exhibition of local artists and a group of local military veterans. One stall which caught my eye specialized in selling mushrooms to which I had no idea there were so many different varieties. Another stall had a fantastic selection of cheeses while a stall further along sold salami’s which I think might have belonged to the gentleman who had been acknowledged with an award the night before.

At 12.30pm we all went for lunch which was at a restaurant just opposite the church and was where we dinned the year before. The Italians do lunch like a banquette with all sorts of different dishes starting with the Anti Pasta a selection of meats, then sea food and then onto the meat courses of which there are usually several of each. By about the 6th plate Paul and I thought it might be time for us to slip away and change ready for our afternoon performance. We never made the dessert and coffee but that was fine as we had had so much to eat that we were both looking forward to getting on stage and burning off some of the calories.

On Saturday night I had had the pleasure of working with sound engineer John and I was pleased to see he was back with me again on the Sunday. On this occasion I had been engaged to sing the music of the 1950s and 60s so I wore my 1950s black and white polka dot dress with all my petticoats. The sun was strong that day so I covered myself in sun cream and wore my jacket for most of the show just to protect my skin. Apart from singing the 50s and 60s I had been requested to include some Italian Opera and to finish my set with Nessun Dorma. 6000 people had been expected to attend the festival and looking at how busy it got after lunch I would say that number was easily realized. Paul delighted the Italians with his Sinatra songs as he sounds just like Frank as the crowds shouted for more.

That night our friends took us out for Italian pizza which was delicious. Everything in Italy is freshly cooked  unlike in the UK where food seems to come from straight out of the freezer. Restaurants are family run and there is a great sense of personal pride which is refreshing to see when it seems almost impossible to find an a affordable restaurant in the UK which isn’t run by a big chain.

In my next blog I will be telling you about our visit to the castle at San Colombano, the Pallai WW2 Museum and Tea with Mussolini.

So Keep Watching and Thank-you for Following! 😉