It’s true to say I’ve never been as busy as I am now which is why I have decided to split my blog into two parts tonight. I’ve so much to share with you all as I’m not long back from completing 8 shows over 5 days and travelling nearly over 500 miles. To be honest I’m still very tired from the weekend and now we are in August it’s a straight run through to September with no free days at all, so very busy indeed!

This last week has been such fun as I’ve been on tour with my good friend Kim who has to be the best looking sound engineer in the business not to mention a frightfully good hair dresser too. In fact Kim calls herself the Hair Hitler and she has been making sure I’ve been going out looking my very best with no fly away bits. I’m afraid when it comes to my hair I can be so slap dash which doesn’t and wont do so I’ve felt altogether much smarter this weekend with her help even if we can be a little like “Hinge and Bracket”.Can’t we dear!

On Thursday we were booked to play in Leeds at Weetwood Hall for a WW1 conference so naturally I was engaged to perform my WW1 show “Pack up Your Troubles”. The organiser Mr Peter Chubb looked after us very well and he gave Kim and I a lovely family sized room which was just as well as Connie was packed full of costumes and hat boxes which we had to un load before we could rig. Thursday must have been a very important night for the conference as he had arranged for a pipe, bugle and drum display and a Scottish piper who piped us into dinner. By the morning we had to be on the road again br 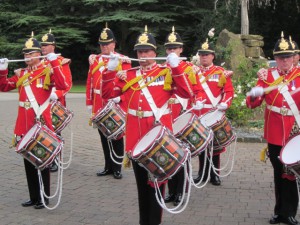 The Pipe and Drums at Weetwood Hall! 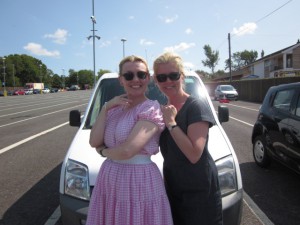 On the Road with Kim!

ight and early as I was due to perform in the Isle of Wight for the Steam Railway’s Victorian weekend. It’s 283 miles from Leeds to Portsmouth so perhaps not surprisingly it took us most of the day. Natraly we ended up in a cue on the M25 which was just horrible and by the time we got onto the ferry Kim and I were ready for a cup of Earl Grey tea. Sadly I wasn’t able to do the Isle of Wight’s Victorian event last year as I was already booked by the Bugatti Club to do their summer rally. So this year was rather special as I had lots of new arrangements and costumes not to mention my new album “The Good Old Days” which I launched there.

More on that tomorrow as I must get to bed now. In the mean time enjoy my photos which I have posted up onto facebook.