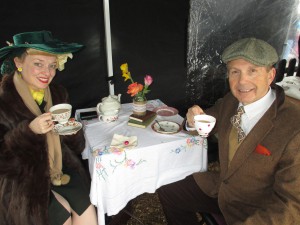 Tea for Two at Shabbytique! 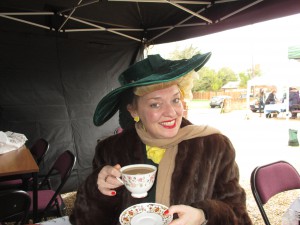 In My Easter Bonnet dispite the Rain! 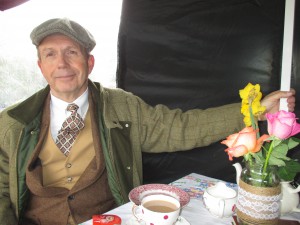 Holding on Before we Blow Away!

Have you ever had one of those days where nothing has quite gone to plan and then the most extraordinary thing happens from out of the blue – well that was Sunday! For those of you who follow me will know I was all set to sing for the Shabbytique Brocante at Waltham St Lawrence on Sunday. Only come the day the weather turned really nasty and Claudine the organiser had arranged for me to sing outside. I had really been looking forward to this one as I was booked to join forces with Swing Dancers the Rocking Rebles only come the event there just wasn’t quite enough shelter to go around. I could see the wind was getting up and when Claudine offered me the escape clause I’m afraid I took it which I hope doesn’t sound  too defeatist! In truth I’ve done a lot of out-door events like this and when you get the combination of wind and heavy rain it’s a killer. China was being blown off the stalls and I could see it wasn’t the day for being out-doors. Paul had driven up to join me so when we had decided not to go ahead we made our way to a local pub for Sunday lunch after taking tea in the marque. We held on as the wind blew because there were times when we thought the marque would take off! Later I knew deciding not to sing had been the right decision when we drove past at 2.30pm to see the stalls had pack away! The Rocking Rebles danced on but it became clear by the afternoon it was too wet to continue. My heart goes out to the stall holders who lost crockery.

Although I didn’t sing it did give me a chance to look around the stalls and I particularly enjoyed “Gorgeous and Glorious” exquisite bespoke hats for hire and purchase www.gorgeousandglorious.co.uk  I have always loved hats and I can’t resist trying them on! Then by change I came across a Phychic Medium and as I was no longer required to sing I had time for a reading. To be honest I take all this sort of thing with a pinch of salt and I look upon it as an entertainment although some of the things she told me were very interesting. Apparently I have a spirit guide and at first from what she was saying I couldn’t work out who she was describing. Then it became clear and I think my spirit guide is my mother’s birth mother. My mother was adopted and we know very little about her parentage although the medium mentioned her having Diabetes and the 1930s which was when my mother was born. I am a diabetic so I found that very interesting and might explain why I’m a diabetic today as the illness is hereditary. The Medium mentioned Ireland and my mother’s birth mother maiden name was Kelly. The medium also mentioned lots of other things which at the time didn’t seem to have any reference until I spoke to my mother and she was able to fill in the blanks. So it’s all very spooky and really rather exciting To know I have a spirit to watch over me.

This week I’m out every day performing my Easter Bonnet shows although the interesting thing is when I wore my Easter Bonnet on Sunday I had to remove it for the medium as she said it was casting a shadow! Time for bed now as I’m ever-so tired with the clocks going forward.