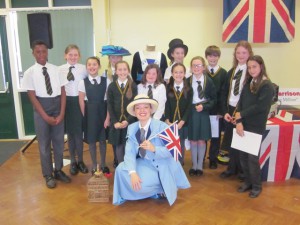 Me on stage with the children from OLMC Primary School! 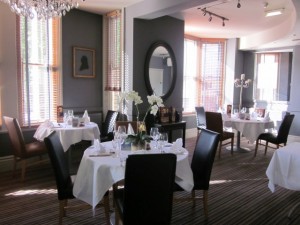 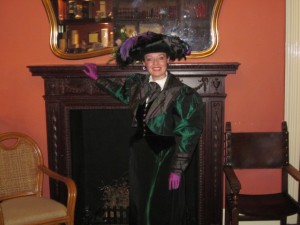 Down at the Old Bull & Bush at The Orton Hotel!

Once again it’s been a full week, with Music Hall shows all the way. On Tuesday I was engaged to sing for a corporate event at the Orton Hall Hotel in Peterborough which was something of a dash as I had a show before hand in Newport Pagnell. Forchantly everything went to plan as I tend to worry a little about traffic but as it turned out all was well and when I arrived at the hotel they had even built a Victorian stage for me complete with velvet curtains! How wonderful was that! This year has been an amazing year for me and it’s true the music of Music Hall is enjoying something of a renaissance,  my diary has never been so busy! The songs from this period are so full of life and I partially enjoy wearing the clothes and encouraging my audience to sing along with them which was probably just as well as they had named the room where I was performing The Old Bull and Bush!  If you click onto my Facebook page I have posted up a few photos including some of the old posters the hotel had on display. When it comes to advertising posters from this period I’m a real fan. The art work is always exquisite and I Love to look at the ladies fashions.

On Wednesday I was back on the road only this time I had been booked into the Regent Hotel in Doncaster. Thursday I was due to perform for Our Lady of Mount Carmel Primary School for their WW1 afternoon and as you might imagine I had put together a very special program for the children. To begin with I performed my “Pack Up Your Troubles” WW1 show for the whole school and then for the second half I took class 6 and broke down the songs telling the children a little more about the history of Music Hall. It’s easy to forget just how important these songs were during WW1. Many were used as a tool to aid recruitment and nearly all raise spirits and helped with moral. I also brought along some of my costumes and books which the children enjoyed looking at very much. I really enjoyed my day at OLMC Primary School and I hope very much to do more work in schools. It’s very rewarding and up to now I have only ever done WW2 in schools so perhaps this is something I will have to look a little more into.

I’m now all set for the weekend which will give me some time to catch up on my paper work. I should have been at Stow Maries Aerodrome for a WW1 event but this has now been rescheduled to the spring!

That’s all my news for now – Keep Watching and Toodle Pip!