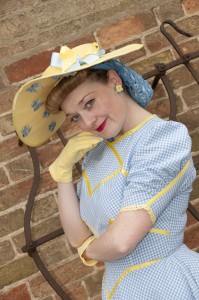 I’m sorry I’m a day late with my blog this week but I’ve had much to sort out this weekend what with one thing and another. It’s hard to belive but I start “Easter Bonnet” shows this Wednesday and I shall be performing at the High Wycombe Vintage Family Fair on Sunday which is being staged at Adams Park Stadium, Hillbottom Rd, Sands, HP12 4HJ. I hope you can all make it along as once again I will be singing 20 minutes on 20 minutes off all through the day from 11pm – 4pm. I’ve had a run of performing these types of shows of late and now its full steam ahead with Easter Bonnets.

Last Saturday I was performing my WAAF show in High Wycombe and then afterwards I met up with my friend Kim for dinner in Quainton. We then headed over to the cinema in Bicester to see “Hail Caesar”, a comedy starring George Clooney. Set in 1950s Hollywood I can honestly say it wasn’t the greatest film I had ever seen although I did pick out one of two lovely outfits. The gossip columnists suits in the film were divine which has inspired me to experiment with light grey this season. When I see a design I like on-screen I usuly make a point to jot it down in my note-book. Poor Kim however nodded off which gives you an idea of just how good the film was. Perhaps one of the high lights if you could find a high light were the dancing sailors who performed a jolly musical number adding some male totty to the proceedings, – and if all else fails it’s important to have a bit with a dog! So marks out of ten – four! 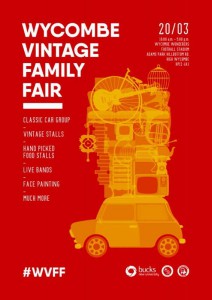 On Sunday I took my mother shopping to Milton Keynes. She wanted to go to Marks and Spencer’s as she has been looking for a new coat. We weren’t able to get a coat but she did find three new jackets she liked and a jumper which was quite an achievement. It’s not easy shopping with my mother as she hates to try things on but it’s the only way to see if something really suits you or not. So I was really pleased we were able to find something she liked.

I’m now busy planning my wardrobe for my 2016 season. It’s all go with the Queens 90th Birthday celebrations and I had a dress fitting with Judi last Friday. My Pearly Queen costume was made for me back in 1990 and I needed  two new panels cut plus a sleeve lift. I’m now busy re sewing the pearly sequins back into place ready for my first Pearly Queen show which takes place on the 31st March.My “Happy and Glorious” show is selling really well too and I now only have four dates left for June!

I’m also thrilled to announce I will be back out in Normandy for D-Day from the 1st – 8th June performing for the British end in Arromanches on the 6th. We are still putting together the final show dates for the program but I’ve been engaged to perform three shows in Arromanches over the D-Day period so keep watching and I shall keep you posted. I’ve also been invited to perform at the Military Odyssey show on the 27th & 28th August. Odyssey is a new show for me and it will be taking place at The Kent Show Ground, Detling, Maidstone. It’s a multi period show although I’ve been asked to perform an American 1940s show to tie in with one of the displays. Once again do keep following my blog as I will have more news on that later.

Today I’ve been working with my pianist friend Ross to note bash through a few new songs for this season. I ordered some sheet music from London a week or so ago and sadly it didn’t arrive in time for my last appointment with Ross. So I was keen to try out the arrangements with her today. I now have three arrangements of Rule Britannia but this Barclay Wilson one is much more user-friendly and the words are better too. All the arrangements have slight variations on the words which often happens when a piece is old. Rule Britannia was writain in the 1700s and I also have a good 1940s arrangement by Malcolm Sargent which Ross lent to me. I will be seeing Richard this Saturday as I have quite a few songs i want to put into production. I will probably ask him to use a few elements from the Malcolm Sargent arrangement while I will be singing from the Barclay Wilson score.

Gosh is that the time I must dash! Keep Following the Blog!