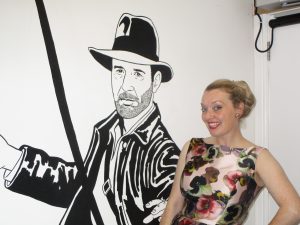 About to Go on Stage at Bournville! 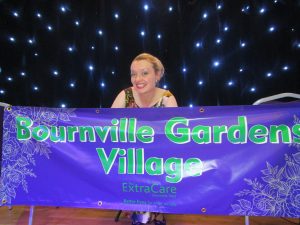 Despite last weeks blistering heat it’s been very much business as usual with a mix bag of shows which has included “The Good Old Days”, “Stars and Stripes”, “The Last Night at the Proms” and my “20th Century Show” which I took to Birmingham on Friday. Tomorrow I’m performing my 20th Century show in Abingdon for the WI and also for a Summer Fate this Saturday which I shall be modifying slightly to suit the clients out-door brief.

Often when I get back from my shows I have to crack on with my paperwork which can be hard when it’s so hot. So I’m pleased the weather has broken somewhat and it’s not quit so hot now enabling me to concentrate. Wednesday was unbearable as we moved my Proms show indoors and 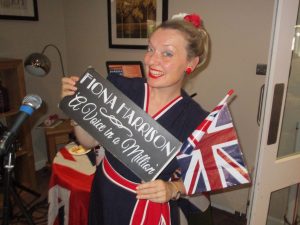 Singing The Last Night of the Proms! 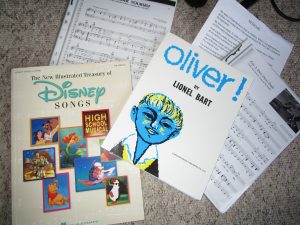 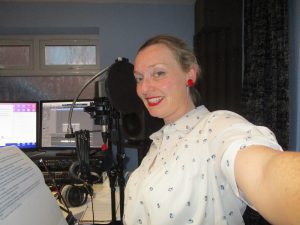 At Work in the Studio!

through the window I could see a squirrel flaked out on a wall too hot to move. I’d like to think he was there because he wanted to hear me sing my Best of British repertoire but I think it had more to do with the heat.

Fridays show was very enjoyable as I stepped in for a friend to perform at Bournville Gardens Village in Birmingham. I had never been there before and from Leighton Buzzard it’s about a 2 hour drive. As it was Friday night I decided to take the cross country route and went via Buckingham M40 but came back the M6 M1 route. I had been booked to perform 2 x 45 minute sets a 100 years of music from 1900 to 2000 although the audience didn’t really start to warm until I hit the music of the 1930s. Once we reach the 1950s it was plain sailing all the way although I think the audience enjoyed the 70s best with Abba and Grease. I shall be returning to Bournville in November with “My Fair Lady” and at Christmas with my new “Fairy Tale Christmas Spectacular” show. I’m looking forward to performing both shows at Bournville  very much.

Speaking of which I was back in the studio yesterday picking up my new medley arrangement of “Oliver”. Richard is such a genus and this is his best yet. It’s quite the monster running in at just over six and a half minutes but due to Richard’s brilliant arrangement it flies by. Richard has remained fairly true to the original pit line up but added in a few extra instruments in places. Yesterday I swapped some of the instruments around as I wanted more trombone in “Oom Pah Pah” to give it a bouzy feel and a little more clarinet was needed in “Reviewing the Situation” to make it sound more Jewish.

Musical arrangements really interest me and I know this “Oliver” arrangement is going to work so well in my new Christmas show. It’s lovely that for the first time I’m able to sing “As Long as he needs me”. Up to now, sung in show context, it’s always been written too low for my voice so we’ve raised the key and the line up cups my voice beautifully while still maintaining that deeper Nancy sound. I’m looking forward very much to performing the medley.

While I was in the studio I put into production a Disney arrangement and recorded some spoken word vocals for the new My Fair Lady show-reel. I hope it wont be too long now before I can release the My Fair Lady video so keep watching this space. It’s now summer garden parties all the way and next week I will be heading off up to Scotland for the Edinburgh Tattoo. So much to look forward too.