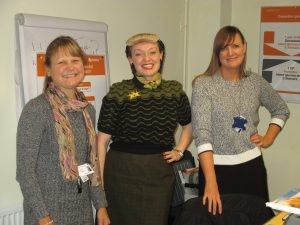 Me with Our Dafne Tutors Andria and Mel! 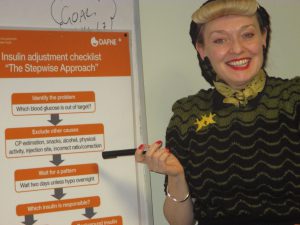 I feel I’ve rather fallen behind with my blogs of late which is hardly surprising when I spent all of last week attending the Dafne course at Milton Keynes hospital. The course ran for five days from 9am in the morning to 5pm at night and taught everything I would need to know about diabetes and how to manage it including Carbohydrate Potions and how to count them. As well as attending the course I’ve been trying to catch up with my paper work in the evenings which has lead to some very late nights and early mornings. I’ve often been working until 2am getting my work finished and rising at 6am which hasn’t been giving me enough sleep.

I have to confess there was a lot to learn, and Dafne was very intense as our tutors Mel and Andria were everso thorough. At times I found it extremely hard going especially as I’ve been burning the candle at both ends. I’m not use to sitting down all day and I’ve been trying to compensate by getting up extra early so I could go for a 7 am run before getting dressed and heading off to the hospital.

Now I’m back home I’ve been struggling a bit with the carbohydrate potion counting . I understand 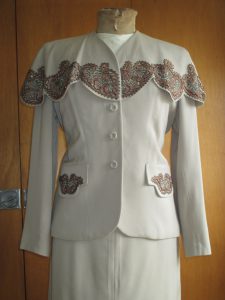 A New Vintage 1940s Suit for the Season!

the principle but being Dyslexic I often get my words and numbers muddled and sometimes I miss read the information and add it up wrongly. This last weekend I had a lot of catching up to do and sadly a few hypos along the way which weren’t good. Dafne is designed to give diabetics a better balance although they want me to have lower sugar levels. I find it a little frightening as I often need the extra sugar which gives me the confidence to rig and perform my shows. Keep watching this space and hopefully it wont be too long before I get the hang of it although at the moment I feel it’s a bit hit and miss.

On a brighter note my friend Yvonne invited me to her vintage clothes sale last weekend and I was thrilled to pick up three fabulous 1940s suits which I shall be wearing this coming season. I also took the opportunity of sending a couple of sacks of clothes along to the charity shop as I wanted to make room for my new arrivals. My diary has been filling up for 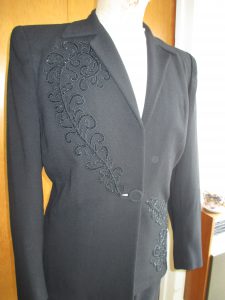 2018 and this year you will be able to catch me in Wales at Milfest, Normandy for the D-Day Commemorations, Newark Air Museum, Hughingdon Manor and at Pickering to name but a few. I will have more news on that closer to the time so do keep watching this space and I shall keep you posted.

Today I’ve been working with David editing a couple of new videos. Today we have been working on the popular 1940s French song J’ Attendari which in actual fact started life as an Italian song before it was adopted by the French. This makes perfect sense as when I sung the song in Italy a couple of ladies came up to me and said it was sung to them by their mothers. It will be good to have a video record of this song as I always enjoy singing it and I’m very pleased with today’s edit.

Today we also worked on “April and You”. Originally recorded by Jo Stafford in 1953 with Liberace I first discovered this 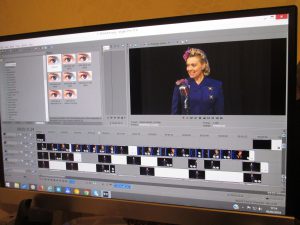 song on an old 78 and my musical arranger Richard Whennell very cleverly copied the arrangement for me. It’s one of those little gems which has been forgotten about over time and I think I can probably say I’m the only person in the world who sings this fantastic number. I wanted to get the video done for Easter as it makes up part of my Easter Bonnet show and I thought it would be an important song to record for posterity.

This Friday I will be heading to L&D Radio as I’ve been invited by Big Al as a guest on his radio show. I still have a few things to sort out and lots 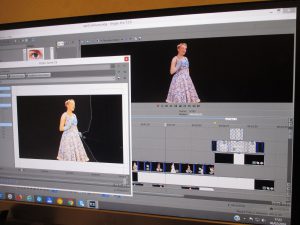 to talk about so I must  bring along my CDs. This Sunday Paul and I will be in Rickmansworth attending the Festival of Film so lots to look forward too.

I will leave my blog here tonight and I look forward to catching up with you all after the weekend as I get set for my next run of shows which will all be Valentine inspired.