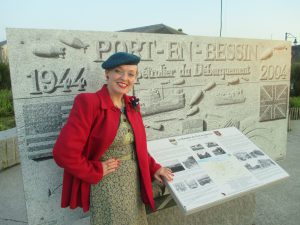 Out and About at Port en Bessin!

Hello every-one as you can see I’m back at my desk and it’s time for my final installment as I tell you about my last two days of my Normandy D-Day tour. It had been my intention to tell my story over three blog entries but after such a great tour three entries just wasn’t enough and since returning home I’ve been working flat out. Last weekend Paul and I were working in the heat at Buckinghamshire’s Armed Forces Day in Weston Terville but I shall tell you more about that in my next blog later this week. So keep following as I have much to share with you all about my shows! 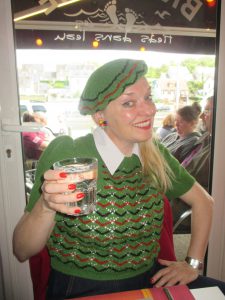 Lunch Before the Show!

In the mean time let me tell you about our final show on the 7th June in Port en Bessin. Port en Bessin always stage their D-Day event a day later as the town was liberated on the 7th. In the film “The Longest Day” the film crew dressed Port en Bessin up to look like the port of Quistreham and if you know where to look you can still see evidence of a faint painted Quistreham sign today. The town is famous for it’s 7th June military vehicle parade and this year I had been invited to perform that evening at 6.30pm in Fountain Square. I wasn’t quite sure where fountain Square was but as it turned out it was right where I hoped it would be on the front right next door to the Commando restaurant Le 47 e’me.

I have to confess I was still rather tired after such a full day of performing on the 6th in Arromanches. You may remember in my last blog I sang for an hour in the afternoon for the Veterans show 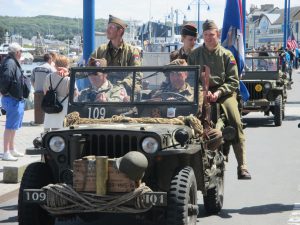 and then the evening show turned into a two and half hour straight through set which is a big sing in anyone’s book! However after a good nights sleep Paul and I were straight up and along to the Marie in Port en Bessin where we met with the organizers and found out where we were performing and changing ready for our evening performance. As guests we were also treated to a wonderful meal in the town as we watched the parade pass by and later that night we were invited to dine at Le 47 e’me which was wonderful.

On this occasion I was engaged to sing for a 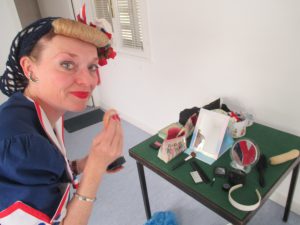 Getting Ready for the Show!

straight through 60 minute set a mixture of British, French and American songs. Paul sang too and delighted every-one with his Frank Sinatra so much so I think the French audience would have liked Paul to have sung for another hour set but unfortunately all good things have to come to an end. We would like to thank every-one who came along to see our show in Port en Bessin including our friends from Italy who we will be entertaining in October when Paul and I fly out to Milan to perform in Graffignana for the towns 1940s event. So thank-you to every-one for joining us it was lovely to see so many friendly faces. 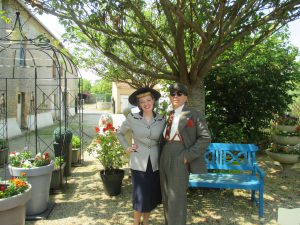 Paul and I at Our Hotel La Magnanerie! 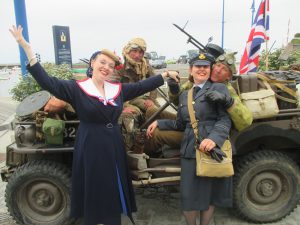 Meeting Friends After the Show At Port en Bessin! 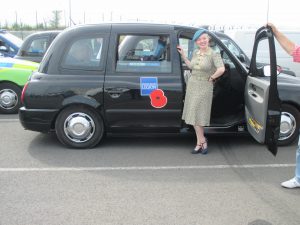 The Arrival of the London Cabs!

Next day Paul and I had to make our way back to Caen/Ouistreham to catch our ferry. We had been staying at the charming home of “La Magnanerie” in the village of Manviux which isn’t far from Arromanches. It’s nicely in the middle for getting to Utah and Sword and we were made very welcome by our wonderful hosts Patrica and Patrick Duval.

We were booked onto the 4.30pm ferry and as we waited at the port we were greeted with 90 London Cabs who had been the transport for 150 veterans. It was a wonderful sight as I caught up with some of the veterans while they were waiting to board the ferry. I also had my photo taken with Ted Emmings who is a fan of my shows and who likes to come over to Arromanches every year with his daughter Sharon Middleton.

When ever I travel to Normandy I always make sure I book a cabin as I have to confess I’m not very good at sea. It’s rather embarrassing when you think I come from a Naval family. My father was in the Navy so was my mothers father and his father ect so I always have to make sure I have a place where I can lay my head just in case of sea sickness. Our sailing over was as calm as anything but this time going back on the 8th I felt very unwell. Perhaps my mistake was to lay down straight away and then Paul and I decided to have dinner at 6.30pm which was the same time as every-one else.  I also have the added problem of being a diabetic and having done my injection before reaching the restaurant we were then presented with a long wait which is fatal to someone like me. With 90 veterans ahead of us in the Que I couldn’t possibly push in front of them which would have been so rude. I had to eat my creme caramel in the Que on the way round and 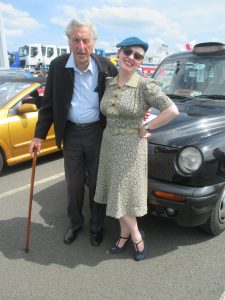 by the time I got to sit down the combination of a hypo and sea sickness had struck.

As you might expect the inevitable happened as Paul helped back to my cabin praying I would have enough sugar left in my body to keep me going. I always carry supply’s with me but when I am at sea they become useless as I can’t keep anything down until we hit port. Once I was back in my cabin with my head down I was fine but getting back to my van from the cabin was hard going as we were parked on the bottom deck with all the London cabs. I was still very week then, and where I can run up and down stairs easily normally I had to take the lift which once again was very embarrassing with so many veterans who should have used it before me. Once we were still and back in my van I was able to hit the Lucozade bottle and get myself back on track. It’s one of 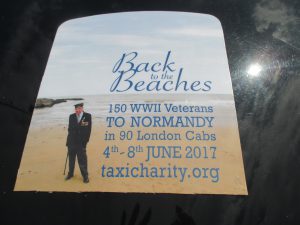 Back to the Beaches London Cab Tour!

the hazards of being a diabetic bit when you have the combination of sea sickness and a hypo you become very vulnerable and you have to wait until you have got over the sickness before you can treat the other.

Now I’m back home I’ve been as busy as ever and I’m thrilled to report I have four new videos which I’m very proud of. Some of you may have seen two of them on my facebook pages. My “Music Hall to Opera showreel” and “The Flower Duet from Lakme'” which I filmed singing both roles Lakme’ and Mallika to split screen. I shall be talking a bit more about that in my next blog when I tell you about my shows at Armed Forces Day. In the meantime if you would like to see my other videos “O Mio Babbino Caro” and “Don’t Dilly Dally on the Way” just click the follow Fiona tab on the right hand side of this screen, it will zip out, click the You Tube icon and my latest videos are the first you see.

That’s all my news for to-night. Keep Watching and Toodke Pip! 😉