Since returning from Belgium my feet haven’t touched the ground. On Thursday I was engaged to sing for the MOD at Chicksands Priory near Shefford for the officers Battle of Britain Dinner. It was great to be invited back as I had the pleasure of singing for them last year. I was surprised that so many of the officers remembered me from last year and I enjoyed catching up with them after the show. Chicksands Priory is full of history, a Grade 1 listed building dating back to the late 12th century and not short of the odd ghost or two. Although I think some of the stories I was being told over the bar involved quite a bit of leg pulling and were a little on the tall side! Mind you the room they gave me to change in was one I shared with two civil war round heads so maybe, anything is possible so they say!

Chicksands has quite a history and during WW2 it became the Royal Air Force Signals station. Later in 1941 it served as a communications center and as an intercept facility, home to some of the ‘Y’ Service personnel, which sent messages to Bletchley Park for deciphering. Messages were also sent from RAF Chicksands to allied agents SOE and to the underground movements in occupied Europe. It was lovely to be back and on this occasion I made a point to look at some of the paintings in the mess of which there are many.

On Friday I was engaged to sing in Wigan for Art to Art at Whelley Ex Service Mens Club. Art to Art had put together a great line up and 13 year old Joe Atherton really stood out with his wonderful singing voice. I also enjoyed Louise Fazackerly a local poet who performed not only one of her own poems but read some War poetry too – which was very moving. We also had a Barbers Shop quartet and a Scottish piper which made for a wonderful nights entertainment. On Saturday I traveled across the country to Doncaster and I was booked as part of a Variety show. On this occasion I had the pleasure of working with Lorrie Brown who does a very similar thing to myself Music Hall and the 1940s. Lorrie and I rubbed shoulders at The Lord Mayors Show in Newham earlier this year although this was the first time we had ever met. I particularly enjoyed her Marie Lloyd Tribute act as I find it very interesting to hear how another artists inteprates the same songs aso myself. I was booked to do a straight through WW1 show and then I drove back to Bedfordshire after my performance.

On Sunday I was engaged to sing for the Houghton Regis Vintage Car show and my friend Joe did very well winning a cup for his prize winning 1940s Willies Jeep. Well Done Joe we are all very proud of you! I performed 3 shows daily mixing in music from the 1930s to the 1960s while Paul sang and dazzled every-one with his wonderful Frank Sinatra. Today I have been out and about performing in Harrow and tomorrow I’m performing in Milton Keynes so I’m still very busy with shows all this week.

That’s all my news for now and I really must get to bed. Do check out my photos on facebook. All you have to do is click onto the star Facebook button at the top of this page

Toodle Pip and Bye for now! 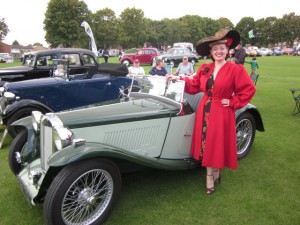 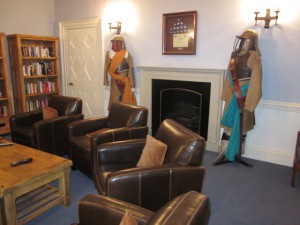 Meet the Round Heads at Chicksands!