It’s bank holiday Monday and that can only mean one thing – Rain! Not that I’m bothered by it at all. To be honest this month has been so busy Im rather enjoying the change in the weather. If you caught my last blog you will know I was working on Saturday performing at the Drayton Parslow’s summer fate. This year the committee went with a 1940s theme and there is nothing I enjoy more than a summers fate. I only wish I could have stayed longer to see all the produce as it ran in tandem with the local horticultural show.  Saturday evening I was booked to sing at a private party in Bracknell at the Grange Hotel so once I finished my show I had to grab something quickly to eat and dashed off to Bracknell. I’m no stranger to Bracknell as Richard who does all my backing tracks has his recording studio there. However on arrival the Police had shut off the road to the hotel as a car had caught fire in the car park opposite. You just never know what fate might throw in your way when you are travelling from show to show. Forchantly all was well and it didn’t take long for me to set up and change into my Pearly Queen costume.

I was engaged to sing for Chicks 90th Birthday Party and what a great knees up we had too.  Chick was born in London so knew all the songs and well you can’t really go wrong with “I’ve got a Lovely bunch of Coconuts” and the “Lambeth Walk” when your audience hail from London! Today I was out and about performing my last ” A Song for Summer ” show for the season and yes it rained! – How very English of it! Not that the rain put me off at all as I took my audience away with a real mix bag of summary songs. Today we went to the Music Hall with “I Do Like to be Beside the Sea Side”, back to the 60s with “Itsy Bitsy Tiny Weene Yellow Polker Dot Bikini”and finished up on a Greek Island with a selection from “Mamma Mia”, so I think we can say a good time was had by all.

Once again I have shows all this week and another private party next Saturday. Only another 5 shows to do before the end of the month which will take me up to 39 show for August. Phew I’m looking forward to taking a break!

That’s all my news for now, keep Watching and Toodle Pip! 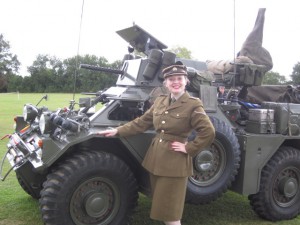 Between Shows at The Drayton Parslow Fate!