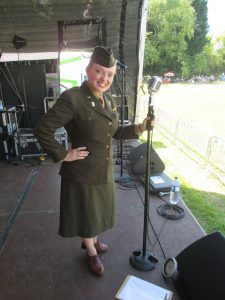 Ready to Strike Up the Band!

I’m sorry this blog comes to you a little later than intended but if you have been following me you will know why. I had much to write up after my Normandy tour which I shared over four blogs and then just before I was due to write this entry I was hit by a hit and run driver. I still haven’t heard from my insurance company about what they are intending to offer me so everything is still very much up in the air. Although I have to say I’m looking forward to moving on and after the week I’ve just had I don’t want to see any more up-setting photos of Connie’s rear end and damage suspension!

It’s time to talk about Buckinghamshire’s Armed Forces day which took place on the 17th June. It seems like ages ago now as it was the start of those soaring temperatures and boiling hot days. Aylesbury council stage the event every other year and I think this was my forth time at the show. It’s a little more up market and run mainly for service personal. This year they 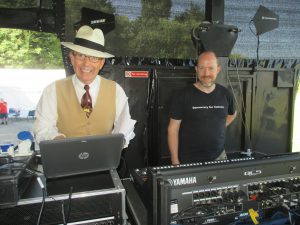 had four stages with me booked to play on three of them, Main, Naffi and in the WW1 village.

Keeping cool in the heat isn’t easy when you are having to wear wool uniforms and I really felt for the RAF band who looked ever-so smart but must have been melting in their uniforms as they marched and played the field. The event had provided us all with a marquee which was divided up into dressing rooms although the heat from the sun made the marquee extremely warm. Despite having the main flap open once changed many people found it cooler out-side in the shade although as I had a full programme to perform 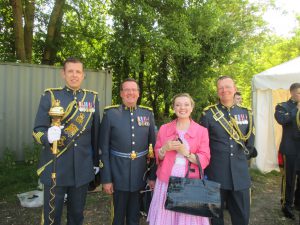 Backstage with the Air Force Band!

I didn’t have time to sit around to find out.

There is a lot to take into consideration when you are a diabetic and I always make sure I bring my own food when I’m playing events. There are always food stalls but I often find it’s not the right food, ques and as I have very little time between sets it’s so important I can eat straight away. I always make sure I bring plenty of water of my own and although this event had water to give away to it’s entertainers that’s not something I can take for granted. Making sure I keep my sugar levels up in the heat is very important especially when you are working hard and drinking lots 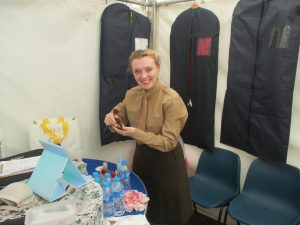 of water which flushes the sugar through. This can also be a problem for non diabetics as there was a case in London a few years ago where an actor collapsed on stage though drinking too much water having flushed all his sugars away.

It’s all in the preparation as first thing in the morning I have a lot to do. It’s finding out where all the other stages are and what equipment is needed and where. Also I have to work out how long it’s going to take me to get from one stage to the other allowing for costume changes and if there is a long walk involved. When it’s hot I have to make sure I have both my water and Lucazade 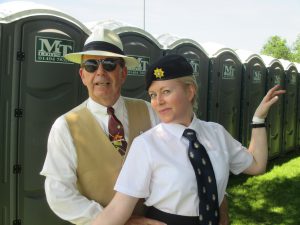 Paul and Kim Meet Up at a Comfort Stop!

with me at all times in case of emergencies which can come on very quickly in the heat when you are working hard.

Fortunately Paul was with me which helps to share the load and on this occasion the main stage and Naffi stage had been rigged by the sound crew. However it was still necessary for us to rig up a small stage in the WW1 village before the sight opened and all the vehicles had to be moved. 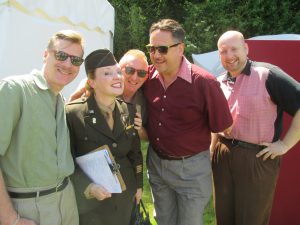 Me with the Jive Aces!

with the computer age I have to program everything into my computer while writing up the show plans so if I need to change a song in the middle of the show I can feed Paul a number and it’s done. It’s essential to have a few either or options so I can read and go with the crowd. I also have to make sure I have a back -up computer just in case of emergencies. For Armed Forces day I brought a couple of different costumes due to the weather as it’s good to have a selection. When it came to performing my glamour set in the Naffi marquee it was too hot to wear any of my 40s dresses so I ended up performing in my play suit as I sang “The Best of Hollywood”. 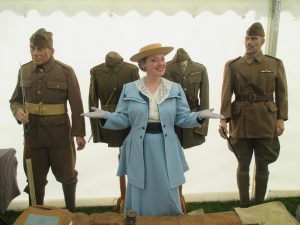 In the WW1 Village!

On the main stage I performed my “Stars and Stripes show” in my WAC uniform which contrasted with my WAAF  set  which I had performed the last time I was there. I opened with “Strike up the Band” but when it came to my second number my computer crashed. This normally wouldn’t have been a problem only I’d been stopped from doing my sound check as the stage manager  didn’t consider the stage safe as lights were still being rigged. This really surprised Nick the engineer as he wanted to check the mikes out and it would have helped both of us. Sound checks are very important because had I 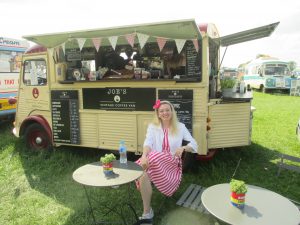 have been allowed to continue I would have discovered the problem before the show and I could have sorted the issue there and then. Due to the fact I had to move my van and rig another stage at the other end of the field I didn’t have my back-up computer to hand which meant I finished the show singing on random with what ever song the computer through up. So much for all my careful planning! Sometimes these things happen and I had to finish my 1pm set with “Goodnight Sweetheart” which at that time of the afternoon was just bonkers!

To have that happen was quite a heart 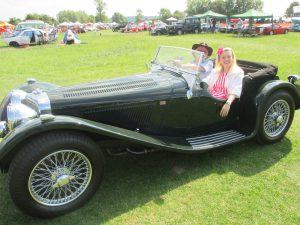 Going for a Spin!

stopping moment but it’s all about being able to carry on and I’m pleased to say all my other shows went off very well despite the heat. The headlining band were the “Jive Aces” and although I’ve worked at events where the Jive Aces were on the same billing this was the first time we were able to meet.  My friend Kim was busy standard bearing for the Royal British legion and by the end of the day we were all exhausted. Paul and I didn’t get away until 7pm so come the next day we took some time out and visited the Marsworth Steam Fair. 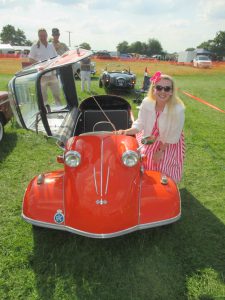 Next week I’ve shows every day and on Thursday 6th I shall be in Suffolk performing my “Don’t Sit Under the Apple Tree show” for a Strawberry Tea at Cavendish Memorial Hall, Cavendish, Sudbury, Suffolk CO10 8AD . Don’t forget on Saturday evening I will be performing at Brooklands School Leighton Buzzard with The Festival Singers “Songs from the Movies”. The concert begins at 7.30pm and tickets are £10 each and can be obtained in Leighton Buzzard from Room 9 or from Selections or on line at http://www.lbfs.org.uk

That’s all I have time for tonight. Keep Watching and Toodle Pip! 😉