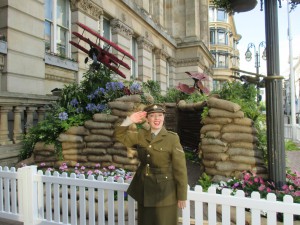 All set for Armed Forces Day

Me with the Royal Signals and Mercian Band

It’s been an amazing weekend. This Saturday I was performing in Birmingham for Armed Forces Day and what an amazing event it was too with the Army the Navy and the Airforce and Royal Signals and Mercian Band all taking part. This year the event took place in Centenary Square which is right in the heart of Birmingham City centre. The weather couldn’t have been better and I was engaged to perform 3 shows – one WW1, one 50s and 60s and for the finally my ATS We’ll Meet Again show. This year the sun shone brightly and Birmingham City council had placed out lots of deck chairs which added to the holiday spirit. Last year we had dreadful weather and it was lovely to see so many faces who had braved the bad weather return for this years event.  I always like to add in something new so it was decided that I should perform the music of the 1950s and 60s for my middle set which went down really well with the audience as we Rocked Centenary Square to “Johnny B Goode”. We even got the biker boys to join us on their Harley’s! I finished my last ATS “We’ll Meet Again” set with Land of Hope and Glory as I handed out lots of union jack flags and got every-one waving while the Royal British Legion stood at the foot of the stage with their flags – A very proud moment! 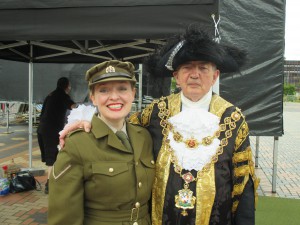 Me with the Lord Mayor of Birmingham

A big thank-you to Raj and to every-one at Birmingham City Council who invited me to sing for Armed Forces Day. Saturday was a fabulous day and one of the best Armed Forces events I’ve done so thank-you. I’d like to say a special thank-you to John Milne and to David who did such a wonderful job on sound and to Gary for compereing. It was lovely to work with you guys so here’s thumbs up to the next one! 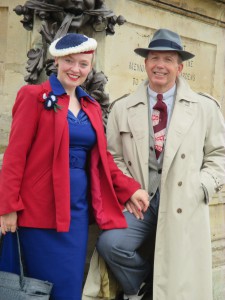 Out and About in Stratford Upon Avon!

the Stratford Road. It has a restaurant next door which is very convenient although the hotel expect you to pay an extra £7.99 a night to stay in their car park which I have to say I thought a little grasping. We also felt the breakfast was some-what incompleted. No bacon, only sausages, scramble eggs and beans. The orange juice had been watered down and the tea and coffee was served from a machine in a mug with no sources. However saying that the staff were very friendly and they did have Earl Grey tea hidden away in a cupboard which I had to ask for it. What a difference to the Fourteas tea room in Stratford Upon Avon. The Fourteas is one of my favourite haunts and it is just that a 1940s tea room with the added bonus of everything being off ration and beautifully prepared. When you order tea it comes in a proper tea-pot and you get a cup and sourcer which makes the drinking of it so much more enjoyable. Paul and I decided to spend Sunday in Stratford -Upon – Avon and after having elevensy at the Fourteas we had Sunday lunch at the Royal Shakespeare Theatre Rooftop Restaurant which has wonderful views of Stratford. A fabulous restaurant and a great place to meet up for lunch. When ever I go to the RSC I always enjoy looking at the costumes as they always have a few on display on the landing. I was particularly taken with a faries costume from “A Midsummer Nights Dream”. The bodice had been made entirely from leather evening gloves creating a wonderful effect. 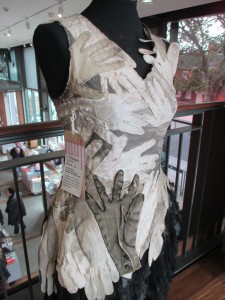 A Costume made from Evening Gloves!

I shall be back in Stratford – Upon- Avon on Thursday evening for a Blitz Bash at Aspire Style Dress Shop, 24 Wood Street. Sadly they had booked a 1940s 3 girl harmony group but for some reason they weren’t able to full fill the engagement so by luck I was available and just happened to be in town to ask. It is so very important when booking acts that contracts are sent and signed. It’s often not understood that a contract works both ways. Just as the artist needs to feel that the date is secure and signed for its nessasary for the booker to acknowledge and send back their part of the contract as soon as possible to secure the act. I’ve just had a similar experience with a client who held onto my contract for 3 months, moved the goal posts and then changed their requirements during which time I received another offer.

This Sunday 5th July I will be performing at Shttleworth aerodrome , Old Warden Park, Biggleswade, Bedfordshire, for the Military Pageant. You can catch me on stage at 11am – 12pm performing my WW1 Show “Pack Up your Troubles” and then at 1pm – 2pm with my 1940s WAAF show “Those Magnificent Men” so I hope you can all make it along.

Must dash Thank-you for Following and Toodle Pip!