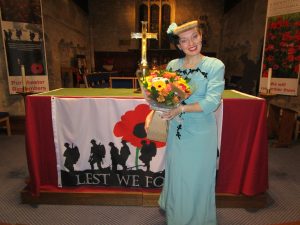 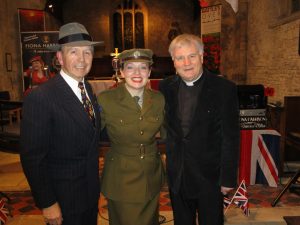 Paul and I with Rev Ian Meredith!

Once again I’m in something of a dash and between shows. Today I’ve been performing in London at Mill Hill Synagogue my “My Fair Lady ” one woman show and tomorrow I’m off up to Birmingham to perform at Bournville Gardens Village. It’s great to have a couple of performances of the same show back to back as it keeps the lines fresh in my brain. With this show there is a lot to remember and today’s show couldn’t have gone better as I sung, danced, narrated and acted my way through the entire “My Fair Lady” score. I’m looking forward very much to performing the show again tomorrow and I hope the Birmingham audience will enjoy it just as much as today’s Mill Hill audience did.

Last weekend Paul and I were down in Portchester performing at St Mary’s Church at Portchester Castle. Once again we had a good audience and I had been booked to perform the music of the 1940s for a special Remembrance show. The church had been beautifully decorated and Paul and I performed the “We’ll Meet Again” show in two half’s. To begin with I sang a sing-along selection in my ATS uniform and then for the second half I changed into my 1940s evening gown. 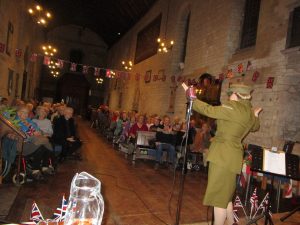 For this part of the show we introduced popular Big Band and Swing tunes, songs from the Hollywood movies, the Vera Lynn classics “The White Cliffs of Dover” and “We’ll Meet Again” and concluded with a British themes medley . Paul sang a selection of Sinatra numbers  which went down extremely well with the audience as they all sang along and waved flags to our grand finally.

I would like to thank the Reverend Ian Meredith for inviting Paul and I to sing at St Mary’s Church and to all the helpers who worked hard to make the church look so beautiful for the evening not to mention the lovely refreshments. Paul and I 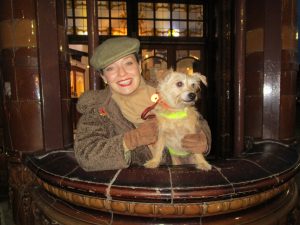 Poppy & I Out-side The Kings Theatre

will be returning to St Mary’s Church on Christmas Eve for Midnight Mass. I have been invited to sing Schubert’s Ave Maria which I’m looking forward to very much.

I enjoy visiting this part of the world very much and no trip to Portchester/Portsmouth would be complete with-out a visit to the vintage fashion shop the “One Legged Jockey” in Southsea. It’s one of my favorite hunts and on this occasion I was able to pick up a pair of white cotton gloves which I really needed and Paul was able to find a beautiful brown silk scarf. I was very tempted to 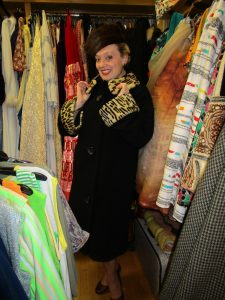 Trying on Coats in the One Legged Jockey!

buy a vintage coat and one 60s black one with fur collar and cuffs really caught my eye, but I resisted in between taking Poppy for her walks along the sea-side and by the Kings Theatre which looked very Christmasy!

With the launch of my new Fairy Tale Christmas Spectacular show I have a very full diary ahead of me. On Christmas eve my first show is in Harrow at 11am. Then at 2.30pm I’m on stage in Amersham followed by me driving straight down to Portchester with a quick run through with the organist at 10pm, and then it’s mass at 11pm. It’s hard to believe but by Christmas eve I will have completed 32 shows in one month with only another 5 shows to perform there after taking me up to New Years Eve. This year  Paul and I will be seeing the New Year in at Warwick Castle.

Christmas is just around the corner and I’m busy learning 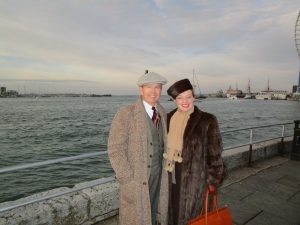 Paul & I Out & About in Portsmouth!

words to new songs and putting the last finishing touches together for “A Fairy Tale Christmas Spectacular”. I hope to be in the recording studio this weekend picking up the last of my Mary Poppins arrangements. I open with my Christmas show on the 28th November and then it’s full steam ahead through to the end of the year.

That’s all my news for now but in the meantime I shall leave you with a few photos from this weekend.