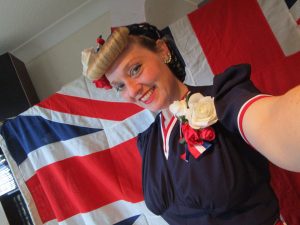 Streaming from Home on D-Day! 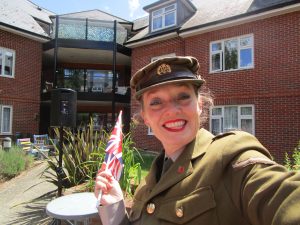 It’s still very much business as usual as I continue to perform my Driveway concerts around Leighton Buzzard. Last week I was fortunate enough to perform four of my originally scheduled D-Day “We’ll Meet Again” shows which took me to Harrow, Banbury, High Wycombe and Wing.  Sadly Saturday’s D-Day show proved to be something of a wash-out. For now I’ve put the show on hold for when the weather improves.  Instead I decided to stream live from my sitting room as the thunder rumbled out-side and Tigger went mad running up and down the stairs until he finally decided to hide under a bed.

It was lovely to see so many of you paying tribute to D-Day and the Veterans on line including my friends Adrian Cox and Steven Oldrid who appeared in the press and on French TV. It seems very strange not to be out in Normandy this year as Paul and I had been booked to sing at the Liberation Ball in Bretteville l’ Orgueilleuse this coming weekend. We had been looking forward to it very much as this would have been our first time singing in the Juno sector and where Paul would have introduced his new album, “Paul Marsden Sings Sinatra”. 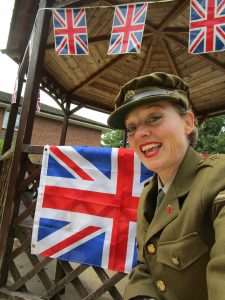 The French press have been busy reporting on how deserted Arromanches and the Normandy cost line is this year which is normally packed full of tourists in June for the D-Day Commemorations. We are already booked for next year and I’m looking forward to when things get back to normal although we must take one step at a time.

Earlier last week I had hoped the concert season at Bletchley Park was going to go ahead. However the task of opening the museum and introducing social distancing measures prove to be too costly to make the opening viable. It’s such a shame as I had been booked to sing on the 12th July and something I had been looking forward to very much. I first applied to perform at Bletchley Park in 1997 and it’s taken me 23 years. Maybe 2021 will be my year as 24 years is a long time to wait for any opportunity. 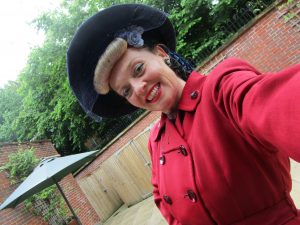 Don’t Sit Under the Apple Tree in Banbury!

I’m extremely creative and I confess I long for new experiences. I’m growing board with so much of the same and I’m constantly doodling down designs and ideas which I long to put into production and make happen. TV has lost it’s appeal and I miss going out for lunch and visiting Antique centers and fabric shops which always inspire me. It’s not the same buying on line and I love the experience of going into a shop and then going out for tea afterwards. Such a treat!

That’s all my news for now. I shall leave you with a few shots from this weeks shows.