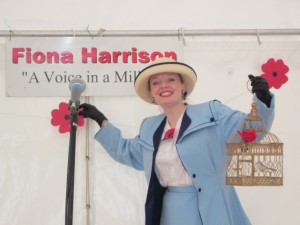 Me performing at Leighton’s WW1 Centenary! 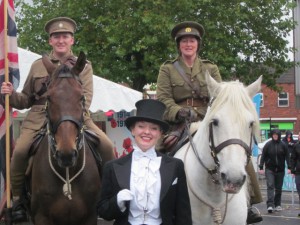 Me Between Shows with the Calvary! 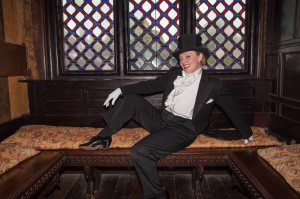 Me in my Burlington Bertie togs at Wythenshawe Hall! 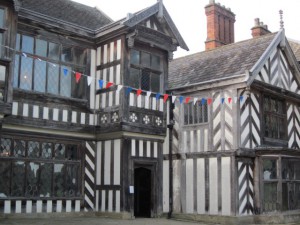 Can there Ghosts at Wythenshawe Hall!

It’s been all go this weekend with WW1 events which started in my home town of Leighton Buzzard on Saturday and then I had to dash quickly  up the motor way to Manchester for Sunday due to the fact I was booked to sing at Wythenshawe Hall for their WW1 event. It really has been a very busy weekend and I was keeping everything crossed for Saturday’s weather. After a lovely Friday Saturday did turn rather wet but not quite as bad as today thank goodness and I was at least under cover in a marquee.

Leighton Buzzard council had engaged me to perform 3 x 45 min shows daily for which I had a different costume for each set. I also had the pleasure of working with Brian and Alison Davey of the Puppet Tree Company  www.puppettree.co.uk who came and performed Punch and Judy while other entertainment included talks and displays not to mention the Royal Norfolk Regiment and two Calvary Horses. After my show I had to pack up quickly and then I headed up to Manchester. I was engaged to sing at Wythenshawe Hall on the Sunday which was my third visit this year so you might say I’m starting to become like one of the family. I like Wythenshawe Hall very much and my shows have always been very well received  there. I partially enjoy singing Opera at the Hall and although I was booked to do WW1 Music Hall I made sure I included a few arias too. However sometimes I get the feeling I’m being watched by the odd ghost or two and on Sunday the strangest thing happened.

On this occasion Paul had come up with me and was working as my sound engineer. At the very last-minute I put in “Those Magnificent Men in their Flying Machines” for a contrast and for some reason the song stated to play and then deleted it’s self from my play list in mid track which is all very strange. So who knows maybe I woke up the Ghosts of Wythenshawe who don’t like “Those Magnificent Men” but are ok with “Don’t Dilly Dally on the Way” and “Nessum Dorma”. Spooky – and it’s not even Halloween yet!

Now I’m back home I have shows all this week and then next weekend I will be in Gloucestershire with shows in Cinderford and Longhope. In the mean time I must get to bed. Thank-you for following and Toodle Pip! 😉