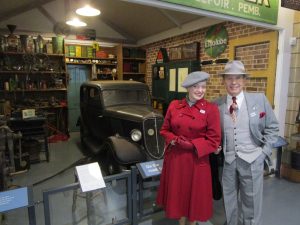 Paul & I at The British Motor Museum! 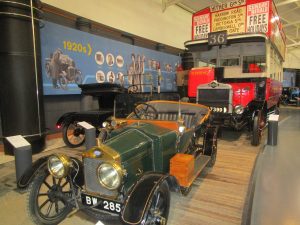 Early Motoring in the 20s!

Every so often it’s good to get away from work and to enjoy some valuable time out. I have been working extremely hard, and I’m thrilled to have booked and contracted 190 shows for this year so far. It’s been hard graft but very fulfilling to see all my hard work taking shape and perhaps not surprisingly Paul and I are looking forward to a wonderful 2020 season.

Last weekend we decided to go away and stay in Warwick as I was keen to visit the Militaria Show which is held every year at Stoneleigh Park. Paul and I traveled up on the Friday after my show so on the Saturday we decided to visit the British Motor Museum at Gaydon. I’ve often seen the signs on the motor way and for years wondered what it would be like to visit. The museum certainly didn’t disappoint as it has a wonderful collection of motor vehicles spanning the years and one or two looked very familiar. I found out later that some of the cars go out to events and a couple had taken part in the Wings and Wheels event at Bicester Heritage. I believe while I was performing there I may well have had my picture taken by one or two of the earlier examples. 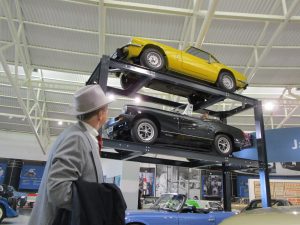 It’s incredible to see all the different designs and to come across cars I remembered my parents driving back in the day. The early cars are design marvels as they chart the history of motoring. Paul even found examples of cars he drove as a young man including a yellow one up high on a gantry. The name of which I can’t remember now but was a design classic when it was new.

The museum even had novelty cars such as Del Boys three wheeler van from the TV series “Only Fools and Horses” and Lady Penelope’s car from the film Thunderbirds. Although a complete fantasy I’ve never seen such an enormous car 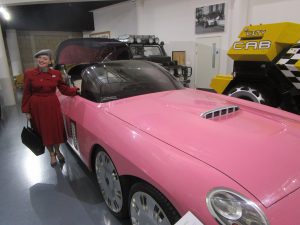 and certainly wouldn’t do for today’s urban life style. I’d love to see how Parker would get on trying to park this incredible pink sci-fi creation in a tight London street!

The next day I made my way over to Stoneleigh. Paul had to return home early sadly, so he wasn’t able to make the fair. Which was a shame as It’s a great place to meet up with friends and to feel the buzz on the street. 2020 is going to be an exciting year with the 75th VE Day and 80th Battle of Britain anniversaries. I went with a shopping list as I have a number of events this year where I will 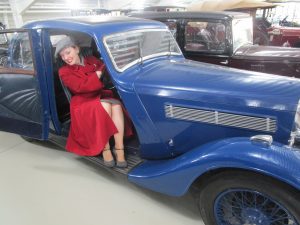 On this occasion I was seeking hats in particular 1940s Halo hats which are perfect for wearing on stage. The beauty of a halo hat is it sits on the back of the head and frames the face which is perfect for singing. I was only able to find one at the show thanks to my friends Yvonne and Theresa. However I did purchased a beautiful 40s Lilli Ann original suit which was on Therese’s stall and one or two other things from some of the other dealers. These included a pretty vintage scarf and a brown every day hat which I shall wear when I’m off duty dashing around Leighton 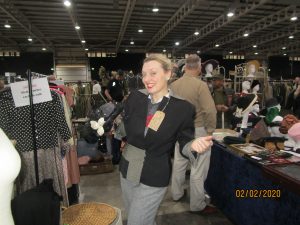 Trying on the Jacket to a Lilli Ann 40’s Original!

Theresa and Yvonne have beautiful clothes and it’s always a delight to see them at events especially when they choose to have a stall. I too should really have a sale but my clothes are like old friends and I hate to part with any of them. Tomorrow I shall be picking up my hat from Yvonne and this weekend I need to set some time aside to have a good tidy up at home. I still haven’t properly unpacked from Christmas as I was straight into the office. 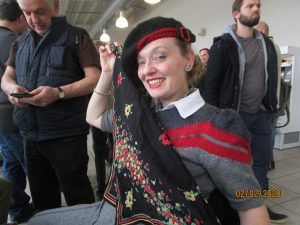 On Sunday I start on my Valentine show season which will be carrying me through all week and then on Saturday I’m heading up to Leeds straight after my show in Abingdon. I’ve been invited to a friends 50th Birthday Party, Diddy Dave. Diddy and I were Red Coats together back in the early 90’s and I’m looking forward to catching up with friends I’ve not seen since my Red Coating days.

That’s all my news for now, Toodle Pip and thank-you for following! 😉 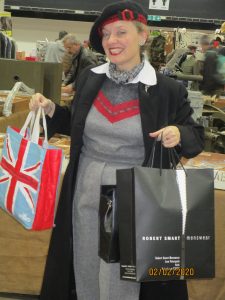 Shopping for Vintage at Stoneleigh! 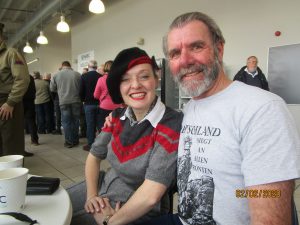 Tea with Brian between stalls!