Hello every-one I’ve just got home after a very full diary of shows which took  me up to Birmingham  for Armed Forces day and onto Warwick. In fact I’ve been in the Midlands all this weekend and playing a verity of shows from WW1, American Swing to ATS and “We’ll Meet Again”. Saturday was all go as I was booked by the Birmingham City Council to do all three and I really enjoyed opening the event with my new WW1 show “Pack up Your Troubles”. Belive it or not I was in the recording studio on Friday picking up my new WW1 track “I’ll Make a Man of You” which I learnt on the way home and sung the next day in Birmingham.  What a song! I found it in a  WW1 song book and I knew at once it would be a real show stopper – as ever Richard has done me proud with the arrangement. I was also able to pick up a new recording of “Don’t Dilly Dally on the Way”. My old track just isn’t up to scratch and wont do so it was great to be on stage with something completely fresh for Birmingham. A big thank-you to John who mixed sound and to Paul who loaded my tracks for me. It was just a shame we had so much rain but like they say the show must go on and my dear friend Paul Casper and I played on regardless! Great show Paul!

As ever I’ve been making the most of this weekend and I spent a little time between shows in Stratford – Upon – Avon doing a little shopping. I confess I have done rather well this weekend buying a couple of 1950s “Hell Bunny” dresses from “Aspire Style” in Wood Street, shoes at “Jones”, Vintage hat pins from the Antiques market and lunch at the “Four Teas” Tea Room. Who could ask for anything more! Once again I have another busy week ahead with 5 shows booked in and lots of contracts and sorting out to do. Now we have gone mobile with my web-site I will be up dating a lot of my pages starting with my 1940s page. I have lots of new photos I wish to use which will help to keep everything fresh and exciting. I’m still having problems arranging my photos when writing my blogs though but I hope to have this sorted out soon. 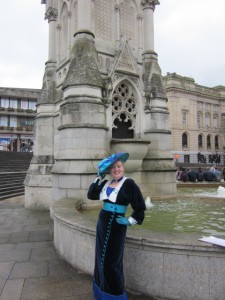 Me in WWI Costume 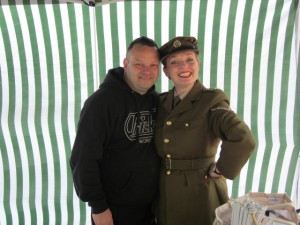 Me with Sound Engineer John 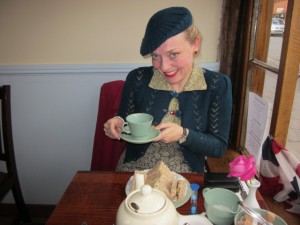 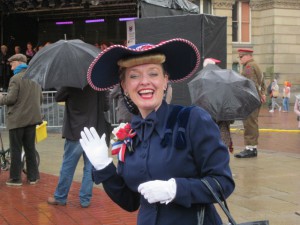 Between Shows in Chamberlain Square