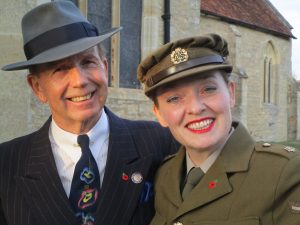 Paul and I in Sherington! 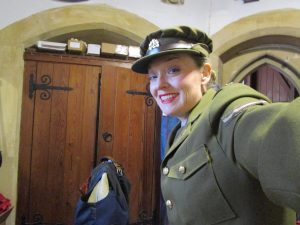 Back-stage in the Vestry!

Once again I’m in something of a dash this week as I have so much to tell you all and get ready for next weekend when Paul and I will be performing for the National Trust at Hughenden Manor’s 1940s weekend.

More on that in a moment but firstly I’d like to thank Alan Sims and all the church helpers at St Lauds Church in Sherington who worked so hard to make Saturday nights show such a success. I always enjoy singing in church as the acoustics work perfectly for soprano voices. Last Saturday Sherington village came together to commemorate the 80th anniversary of WW2. Paul and I had been engaged to sing a selection of popular British and American songs from the War years and it was lovely to see every-one joining in as we performed our War time concert in two half’s.

During the interval there was wine and home cakes which went down particularly well with the audience especially as it was all off ration. Paul sang the best of Sinatra and now it’s full steam ahead as we change from ATS uniform to WAAF with the run up to the Batttle of Britan this week 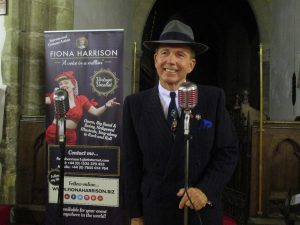 For those of you who know your history Hughenden Manor was Operation Hillside during WW2.  From 1941-46, Hughenden was home to a secret map making operation for nearby Bomber Command HQ. This weekend it will be possible to step back in time and experience the drama of the Second World War with living history re-enactments, military and civilian displays, food, music and dancing from the era.

I shall be comparing the event and performing 3 x 30 minute shows daily. 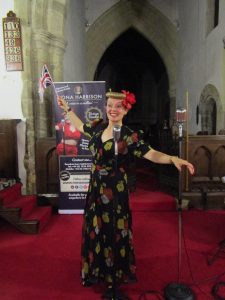 Two will be vocal performances and at 1.30pm I shall be running the dance workshop on the Parterre stage which is open to budding dances of all ages. My show times are as follows :-

Paul also has his own singing spot this year and he will be on stage at 2.30pm performing on the Parterre Stage where you will be able to hear him sing all those wonderful Sinatra swing 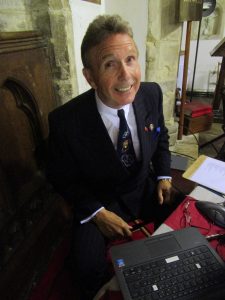 tunes. For the first time we have DJ Dave Dawes from 1940s radio and back by popular demand the wonderful three girl harmony group “The Polka Dots” who are renowned for their slick sassy routines and tight harmonies.  Other attractions include a re-nactment skirmish between British and German infantry across the parkland and lots of civilian and military vehicles.

A flypast has been booked for both days with the RAF Battle of Britain Memorial Flight. (Subject to weather conditions) and this year we are expecting to see a Spitfire on both days. If you fancy getting involved you can also have a go at a Home Guard drill with the Civil Defenders, enjoy an old fashioned Punch and Judy show and discover more about Hughenden’s secret war-time history by joining one of the ‘Hillside’ talks with the expert volunteer guides. 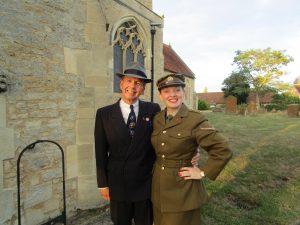 There’ll also be a vintage fair to explore with craft stalls selling handmade gifts, cards, vintage clothing and jewellery and for the first time Angela a vintage hair dresser. So ladies if you feel like having your hair  done in a 1940s style Angela is the lady to see. I’ve already booked my appointment! In the Stable yard shop a selection of historic memorabilia will be on sale including books and music from the era, and in celebration of Hughenden’s 1940s weekend Chiltern Brewery has crafted a limited edition Battle of Britain ale for visitors to buy.

More details can be found by going to Hughenden Manor’s web page by clicking the link https://www.nationaltrust.org.uk/hughenden/whats-on/hughenden-1940s-weekend 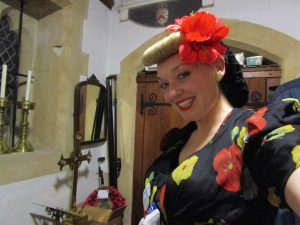 That’s all my news for now but next week I shall be off to Colchester and the East Anglian Railway Museum as I get ready for next years Steamy Vintage Encounter. More news on that next week. In the mean time enjoy the photos from Sherington and Keep Following! 😉 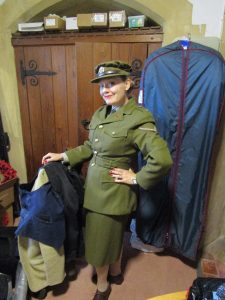 Dressed and Ready to Roll!