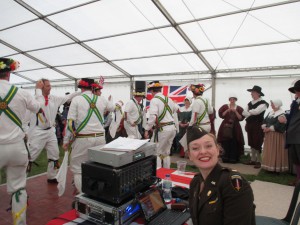 Behind the Scenes with the Morris Men at Abingdon Air Show 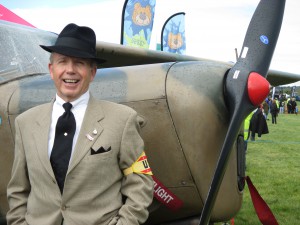 Come Fly With Me – Paul at Abingdon Air Show!

Once again I’m in a bit of a dash to get everything done tonight as I have a very long drive over to Suffolk tomorrow. I’m booked to perform a “We’ll Meet Again” show in Woodbridge and this week is quite crazy with 9 shows to squeeze in over the next six days and then I’m off on tour down to Chichester before heading into London. I’m booked to perform on the Tatershall Castle River boat on the 13th 14th May which is moored at the Victoria Embankment so it’s all go as I steam ahead with VE Day and 1940s shows!

For those of you who have been following me will know I was at the Abingdon Air and Country Show on Sunday performing 3 shows daily. Paul was able to join me on stage and he wowed the crowds with his Sinatra style vocals. Paul is becoming quite the star and it’s wonderful to see how quickly he has improved. I was a little worried about the weather when we arrived but as I was booked to perform in the entertainments marque all was well. We did have showers but it brough everyone into our marque as we sung all through the day and kept the crowds entertained. At one point we had a terrible down pour of rain. I had just come off stage from my American “GI Jive” WAC set and it wasn’t quite time for the Morris Men. So in true British style I gave an impromptu performance and got the crowds to sing-along with my Cockney Medley. You can’t go wrong with “I’ve Got a Lovely Bunch of Coconuts” and “My Old Man Said Follow the Van and Don’t Dilly Dally on the Way”. It’s part of being British having a good sing-along when the weather turns nasty! When it comes to music I have so much in my repertoire I can pull out in an emergency and what fun we had too even though I was still in my WAC costume singing British! 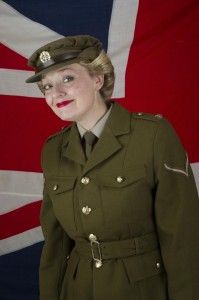 All Set for VE Day!

These next two weeks are going to be ever so busy so I think it unlikely I will be able to blog and tell you my news until Sunday so do please bear with me. By the time we reach the week of the 18th May I hope to have a little more time – however not much. I head over to Normandy on the 2nd June and I have all sorts of shows to prep for in the meantime. Speaking of which I must leave it here tonight. I will try to keep you all up to date with my photos on facebook. I’m having a bit of trouble that my blogs, for some reason they don’t seem to be clicking through to Facebook so that’s another job for Rachel my web-designer to sort out.