A womans work is never done and I’m now back at my desk after a full week of shows. On Saturday night I had the pleasure of being the surprise guest at Keith Dorset’s 70th birthday Party in Watford. Georgina his wife had engaged me to sing the 1940s and everyone came dressed up in the period which made for a wonderful party. Then on Sunday I was singing at the Brackley Music Festival. I was on stage with some great singer song writers and guitarists 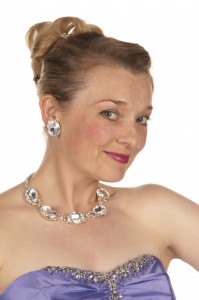 in particular I liked Jodi Mc Carthy who had that wonderful Nashville sound and Craig Papworth who made me laugh with his sense of humour and take on well-known songs.  Even if he did seem a little disappointed with the lack of groupies, free beer and drugs on offer but then Brackley is very respectable and we did have to compete with the Grand Prix and Silverstone just the next village away!

Now I’m back  home I’m having to catch up on paperwork and sort myself out for next weekend. Saturday is going to be an interesting one as I’ve been booked by the Queen’s Own Gurkha Logistic Regiment to sing for their Mess Dinner in Aldershot. They are having a Blackadder theme and I’ve been asked to do the WW1 part . The Regiment are all coming in costume so I have a feeling this Mess dinner is going to be really fun. Perhaps I should have boffed up on Blackadder first. I only ever saw the medieval one and a bit of Queen Elizabeth the 1st. I shall do what I always do in a situation such as this. Play along and be just that little bit theatrical which I think in this case will be just the ticket – slap my thigh and call me BOB!

On Sunday I’m then having to dash down to East Ham to host the Mayor’s Newham show and this time I’ve been asked to do it as my alter ego “Evette the Spivette”. Sunday is going to be a really busy day as I’m booked to perform my WW1 show “Pack up Your Troubles” at 1.25pm and a Big Band and Swing set at 5.35pm so it’s all go! In the meantime I’m in Cabaret tomorrow with another WW1 show to do on Friday and dress fittings in-between.

That’s all my news for now. I hope to be in the recording studio next week but more on that later